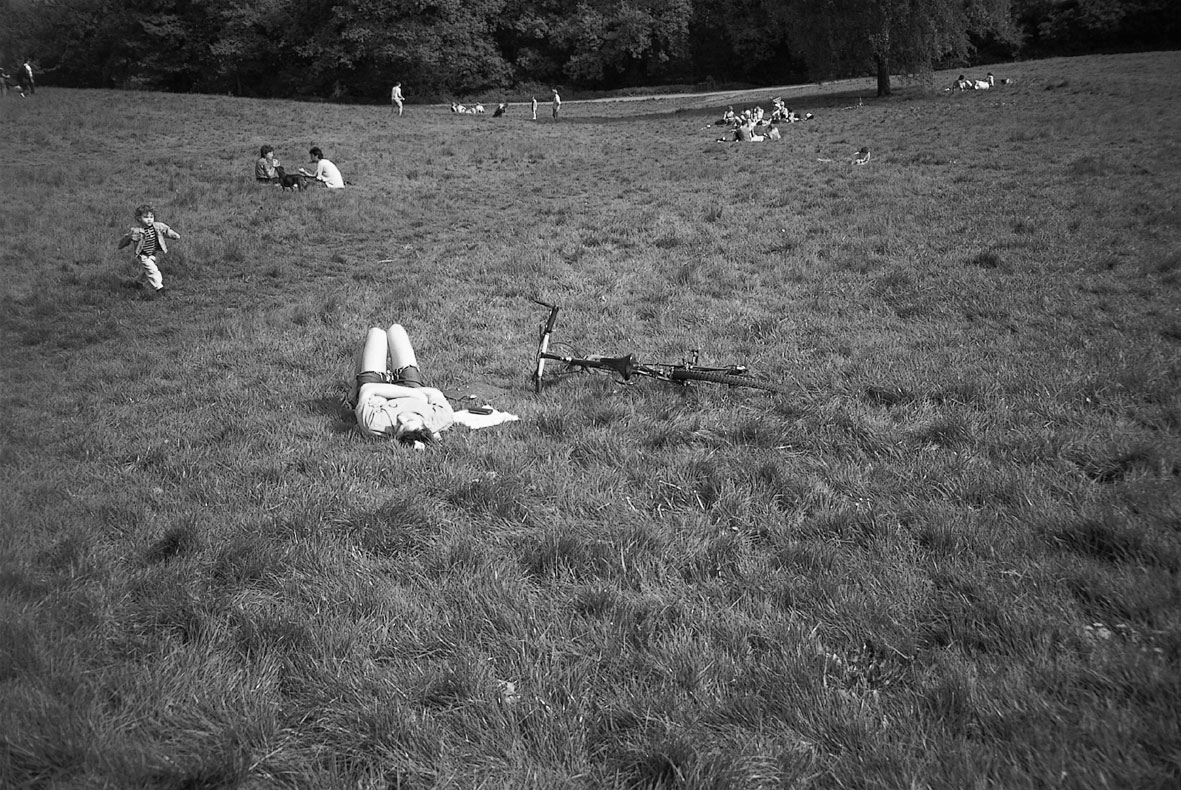 Inner
14. AER Recorded at the Inner Garden, the Meiji Shrine, Shibuya-Ku, Tokyo, October 1990
15-17. hhh IN THE STREET?
18. In a Constant State of Rebellion
19. Bruce Gilbert THE BOOK* (with thanks to Daniel Menche)
20. A Happy Belgrade Recorded on Guy Fawkes night at Primrose Hill, London, November 1987

VITAL (Netherlands):
A shuffle-play, 20 track, 42 minute, international compilation which I received earlier this week and have not yet taken out of the player. Brief spurts of radio distortion, speech loops and silence lace the edges of longer tracks by composers like Leif Elggren, one of the (now several) Kings Of Elgaland – Vargaland, Benny Nilsen, Andrew Lagowski, Joe Banks, AER, Bruce Gilbert and label sleeve designer Jon Wozencroft. His Majesty’s contribution to this set titled ‘Mother !!?’ is constructed from a beautifully processed recording of the Swedish talking clock, which like most talking clocks has to be phoned again after a minute or two. I first heard this track sometime last year and was totally captivated by the sheer intimacy captured within the familiarity of the sound experience. After all, who hasn’t asked the phone the time. Elggren’s pristine processing of the recording somehow gives it a Terry Gilliam/Brazil type of atmosphere and shrouded it in a sinister cloak much like the one worn by The Conet Project (Quadruple CD, Irdial Discs, 1997). Benny Nilsen, once Morthond, now Hazard released a brilliant CD ‘North’ under this name on ASH earlier this year. His track on this compilation ‘Peenemunde’ is of similar ilk, less cold than his music on ‘North’ – which certainly iced my goolies, more like skin straining as it is slowly stretched across unyielding bone. Andrew Lagowski is perhaps better known as S.E.T.I., and regulars will by now be bored by the deluge of adjectives I manage to unearth in order to express my admiration of his music. The timelessness of his previous works, like ‘Knowledge’ and the recent ‘Above Black’ is reiterated in ‘Aurora’, which is included here as a preview of his forthcoming album ‘POD’, also destined for release on this same (dead) label. This track opens with a voice describing the propulsion system of an experimental ‘black project’ triangular-shaped flying machine designed as part of the Aurora Project, about which I have heard, and which prompted me to conduct an AltaVista search, sadly to no avail. I ended up at Bob Lazar’s rather glossy homepage (blush). The usual creepy corridors of Lagowski drones uncurl like computer-generated landscapes. Occasional dental whines and distant falling civilisations colour the horizons with uncertain fog and swirling dust. Joe Banks, AKA Disinformation provides yet another of his twisted, buckling recordings of VLF radio anomalies, which stutters and stumbles like a ketamine god blindly seeking an exit. This is followed by a beautiful location recording by AER – Alpha Echo Romeo – which was made in the gardens at a shrine in Tokyo. A beautiful sonic counterpoint to the previous piece. Bruce Gilbert’s track ‘The Book’ was constructed from source material provided by Daniel Menche – it’s another exercise in dynamics which ends almost as soon as it starts – clever timing. It’s left to superb photographer/ designer Jon Wozencroft to close this chapter with his delightful recording of a fireworks display, aptly titled ‘A Happy Belgrade’, replete with all the approving ‘oohs’ and ‘aahs’ of a Guy Fawkes crowd in London in 1997. (Or maybe it’s the G8 overlords and their kin jissing over missile video footage while they pour boiling oil over writhing monkeys’ brains, and wait with bad, bated breath for that particular odor of seared evolution to waft nose wards as a sign that it’s spoon-dipping time ?) Is there anymore room in the ASH International cap for yet another feather, I wonder ? [MP]

…and thanks for sending Antitrade, a terrific piece of work. I wouldn’t call it a compilation as this is not a mere collection of tracks. The sharp-looking packaging (with, as always, intriguing photography and crisp typesetting) works extremely well with the music it’s designed to wrap. Touch/Ash releases excell in this aspect and I think it’s a point that deserves wider attention… The sound itself is curious: dense with information it has at the same time a simple, almost organic feel to it. Maybe it’s my organism that is humming along? Anyway, this CD is more than a sum of its parts – it’s like a music installation where one is exposed to different facets / dimensions of a given piece. Ideally I would broadcast this CD in its entirety. Touch provides ample inspiration for the sonic adventurous – not only by the work you release but also with the people you team up with. Name-dropping as a path to new discoveries…

Ever wanted to temporarily turn your bedroom into an art gallery? Well if so, then this is the album you need to purchase to furnish your new ‘tour de force’ of meaning and feeling with the requisite audio touches. Antitrade is a compilation of mouth frothing minimalism and interminable distortion. One minute you’re sitting inside an electrical generator, next minute you’re a fairy on top of an electrical pylon in the middle of nowhere, next minute you’ve tuned in to some random frequency to see if you can decipher messages from space within the imperceptible fuzz. Definitely music for mass murderers and for that reason it’s not the kind of thing you want playing the moment a couple of friends step inside your room, because after listening for around three seconds, they’re likely to look at you in a rather queer manner, step back outside pretty quickly and feel glad that they’re still alive. One noticeable track is S.E.T.I.’s Aurora which as the title suggests glides and dips in an icy cold and indeterminate manner while waht sounds like a huge metal monster struggles for it’s last breath of life. Music like this is so often written off mainly because music journalists and others have not as yet created a common language for which such music can be compared, contrasted and valued. Music like this is so often not listened to because the feelings that it conjures up are complex and perhaps ineffable and for that reason downright scary. Get to know yourself a little better if you dare! [Mike Williams]

I hope everything is going well for you. Don’t worry, I will not bother you for too long :), I just wanted to let you know that this morning I received from Dutch East India the album compilation “Antitrade: An Ash International Compilation”, I was so very excited!
It is a great collection of electro-acoustic, dark ambient, sound collage, minimalist sonic experimentations that explore the textures of sounds and frequencies creating atmospheres that are at times organic, and at times synthetic and surreal. These artists will be a welcome addition to my radio show Le Vestibule, and I really hope that I will have the chance to discover more from the Touch Music lable in the future. Please continue to break the barriers, and to amaze us. Best regards as always. Take care.
Jean-Francois Fecteau
Le Vestibule
565 Lacerte
Trois-Rivieres-Ouest
Quebec, Canada
G9A 3C1

The “deceased” Ash International has been responsible for a number of bizarre and vehemently non-commercial projects, The Ghost Orchid (a catalog of unexplained Experimental Voice Phenomena), the reinterpreted electromagnetic noise of Disinformation vs Various Artists’ colossal Al-Jabr, and S.E.T.I.’s X-phile delight, Above Black, being recent examples. But the strange Ash crew pulls out all stops on Antitrade. If there’s a concept guiding this assemblage of digital deviations, it’s too fuzzy to be discernable. The label’s players all contribute exclusive material, ranging from the bleak, oscillating choral drone of Hazard (CMI’s Benny Nilsen) to the impeccable fragility of AER’s Japanese garden shrine recording. The Ghost Orchid compiler Leif Elggren contributes an EVP-ish vocal treatment, Disinformation trades ear-buzz for electroacoustic crackle, S.E.T.I.’s Andrew Lagowski smothers another conspiracy theory under shifting electronics, and hhh (label honcho Mike Harding, Mego’s Florian Hecker, and a long-absent Holger Hiller) microprocess radio samples into byte-sized oblivion. A curious, Aube-like miniature from Bruce Gilbert and a you-are-there recording of a Guy Fawkes Night fireworks display complete a typically odd but compelling set.

And now for something completely different …. This is a strange and uncompromising collection of audio work, ranging from Disinformation’s experiments with alternating current (‘the VLF harmonics of the 50Hz ELF fundamental’) to fat synthesizer mantras from Hazard that sound like huge spaceships. hhh from Vienna make strange abstract soundscapes from the radio, Leif Elggren, a Swedish composer and artist, makes beautiful and disturbing environments, SETI make spacy music and sounds, and there’s a beautiful recording of the Meiji Shrine, Tokyo from AER. Next up, Bruce Gilbert keeps us guessing with unidentifiable sounds, and Jon Wozencroft finishes off with a recording of Guy Fawkes night (” Ooh! , Aahh!, BANG! POP!) … but I think my favourite track here is hhh’s “In a Constant State of Rebellion” (looped speech) for the humour factor alone… 😉 An excellent compilation from a consistently good label.

Isn’t there a more imaginative way of packaging noise than yet another revulsionist aesthetic sleeve?

Ash International, for instance, go with a photo of a dreamer on Hampstead Heath, a bunch of minimal Jon Wozencroft typography, and a barely-there barcode strip to present the 20 audio science experiments on Antitrade (Ash International [R.I.P.] Ash 4.1). Disinformation’s “9V DC Supply With Homemade Copper Solenoid” belies its techie title with lovely wisps and tatters of VLF static. AER, “an airline that doesn’t own any aircraft”, are location recorders without a clear object; while “A Happy Belgrade”, another uncredited field tape of Guy Fawkes night, vividly imagines gunfire and explosions over London. Short static bursts from hhh; good abstract cuts from Hazard and Bruce Gilbert; less successful conceptual pieces from Leif Elggren and S.E.T.I.; surprise voices and silent tracks – they all add up to a decidedly mixed take-home bag from Ash’s arty-party.

My new favorite example of why “ambient” experimental pieces don’t have to be new age rubbish. [John Straub]

This Ash International compilation brings you on an unconventional trip into space via radio airwaves… Trapped in a claustrophobic ship resounding with echoing repetitive female vocal message, you rapidly feel the icy blast of sounds arriving straight into your face. Vibrations start surrounding you while HHH intensify their sound wall. Other specialists S.E.T.I. come and reinforce the already tense atmosphere of void panic crushing your brain. You feel like you are being oppressed by an invisible presence around you… Your heart pace keeps on accelerating, your breath gets smothered and choked while all the microsonic particles penetrate your anatomy. And suddenyl you wake up, safe… the mind trip was extreme! For a fraction of a second you hesitate, extend your finger to the play button and plunge again escaping from your everday life…A dreadfully stressing experience! Your turn now…”net one!!!!!!”. (7/8)

The ‘deceased’ Ash International has been responsible for a number of bizarre and vehemently non-commercial projects. The Ghost Orchid (a catalog of unexplained experimental voice phenomena), the reinterpreted electro-magnetic noise of Disinformation vs Various Artists’ colossal Al-Jabr, and S.E.T.I.’s X-phile delight, Above Black, being recent examples. But the strange Ash crew pulls out all the stops on Antitrade. If there’s a concept guiding this assemblage of digital deviations, it’s too fuzzy to be discernable. The label’s players all contribute exclusive material, ranging from the bleak, oscillating choral drone of HAZARD (CMI’s BENNY NILSEN) to the impeccable fragility of AER’s Japanese garden shrine recording. The Ghost Orchid compiler LEIF ELGGREN contributes an EVP-ish vocal treatment; DISINFORMATION trades ear-buzz for electro-acoustic crackle, S.E.T.I.’s ANDREW LAGOWSKI smothers another conspiracy theory under shifting electronics, and HHH (label honcho Mike Harding, Mego’s Florian Hecker, and a long-absent Holger Hiller) microprocess radio samples into byte-sized oblivion. A curious, Aube-like miniature from BRUCE GILBERT and a you-are-there recording of a Guy Fawkes Night fireworks display complete a typically odd but compelling set. [Gil Gershon]