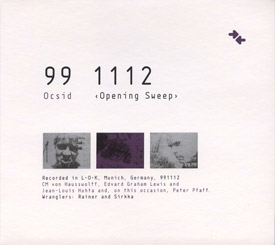 Opening Sweep was recorded at L-O-K, a club in Munich, Bavaria, on the 12th November 1999.Ocsid started performing before the audience arrived: and finished as the floors were being swept (2200 – 0330). Opening Sweep is the first 75.04 experienced by five dogs and a man. It took a year before Ash received the MD master, as they are all exceptionally busy people; Graham took part in the reformation of Wire and subsequent tour; CM exhibited and performed around the world; Jean-Louis started a family whilst continuing to record and play. Discussions as to whether the master should be altered in any way… or not… were intense yet brief… it wasn’t… this is it…

They all live in Sweden. Because of global warming, the bears in Stockholm Zoo can’t hibernate, so their cages have to be refrigerated. The CD was then mastered by Denis Blackham onto exabyte digital tape at Country Masters…

Cracked Machine (UK):
Just want to get on the outside… I was dreaming… ##### I began to lose control… I was feeling insecure…

Lennon’s loss of control could be seen as the ultimate representaion of the hopelessness of the hapless 20th century rock star. During the final years of his life Lennon, who had always sung of freeing the mind, was utterly confined and alienated by his massive popularity.

Cut up officious German voice, zooms in and out of focus, and echoes incoherently about in vast grey chambers, ordering the mashing of all brass bands by giant rotor blades. But the brass bands are irrepressible and parp from beyond the grave. Their bodies were gone, but their art lingered on. They cannot mash us all. Frozen gun shot beats decelerated to 3 rpm, energy sucked into circuit boards and blasted out in terror or joy? Is that ‘Casino Royale’ in your kitchen?

Technology as a means of control, tracking, scanning, spying or as the liberator of humans from their present lamentable condition. The internet has been called a great equaliser, but perhaps the atom bomb is more so. Closed circuit TV crackle – On screen: Ocsid presenting technology as a step or series of steps leading either up or down? Or are they just leading? Fractured Radio broadcasts hijacked and ruptured… ‘Ominous’ replaces ‘Edvard’ as his name on days like these!

Massive solitary pulses, drones, hums, machines taking over? Over what? Late Throbbing Gristle into Coil – elph and beyond. It’s sinister but sometimes once is not enough! Glitches twitch… The spur of ‘In Esse’? Improvisation? It can’t be the theme from ‘Countdown’ can it?

It could be considered post-industrial even though that’s too much of a defining cliche for sound sculpture as unique and unsettling as this.

The Sound Projector (UK):
From Munich comes this magnificently awesome monolith of music, a complex noise-assemblage replete with dark undertones and cosmic messages. This long continuous piece opens with a throbbing mighty bass drone at the lower end, littered with high-pitched feedback and other bizarre debris near the top end. In between, muffled voice samples are layered into the sandwich. One of the more obscure and mysterious musical actions, which we rely on Ash International to bring to our attention. Recorded at Munich in a nightclub by Edvard Graham Lewis, Jean-Louis Huhta, Peter Pfaff and the mighty Carl-Michael von Hausswolff. En passant, I’d like to say that the two releases by CM which I’ve managed to stumble across are enough to convince me that he is indeed the key-holder to a gateway into another dimension. As its title indicates, Opening Sweep is filled with swooping sounds, gigantic sheets of abstract noise which drop down from the skies like huge black tarpaulins onto their unwilling victims, writhing on the sands below. As you’re enveloped and trapped in this smothering din, predatory birds such as condors or vultures swoop down from the mountains and use their beaks in a razor attack, while belabouring your body with their mighty wings. An immersive experience which I’m sure you will find enjoyable. Then there’s the radio voice-samples episode, which easily transcends the lesser efforts of many a joker in this often-attempted area of sound collage. It’s an eerie sequence. Ghostly, unintelligible fragments of voice float and hover over a sinister, foreboding organ-note drone of imminent doom. A moment of banal pop song is selected, and transformed into a message from the Oracle. A second newscast is plucked from the ether, then looped into an echoing repeat. All of these dead voices are like phantom apparitions, not inappropriate given that Ash International have just released a follow-up to The Ghost Orchid, another set of voices of the dead which mysterious manifest themselves over the radio or on tape-machines. The strategy is echoed in the sleeve art, with its postage-stamp sized distressed images of faces hovering like TV specters on video screens. The voices slowly dissipate, only to be replaced by the invading army of lumbering robots marching slowly in; their steel feet crashing into the earth, their circuits flashing blue fire. Soon joined by other nameless horrors. The meaning of this terrifying parade remains obscure. Nonetheless, the piece proceeds to its grim conclusion with an inexorable purpose. Not many pieces of music are able to convey such unnameable emotions: awe and fear, certainly, but also a sense of mystified wonder at our own humanity, and the things present in the universe which we can’t even begin to understand. Quite a rare thing, really. If there is any artistic precedent for Opening Sweep, I would suggest a list that begins with Samuel Beckett and ends with Mark Rothko. Recommended. (Ed Pinsent)

VITAL (Netherlands):
Oscid is the name chosen by such busy bees as Graham Lewis (of Wire, Dome, He Said fame), CM von Hauswolff (Phauss and king of Elgaland-Vargland) and Jean Louis Huhta, from the Lucky People Center. This, their second CD, was recorded live at an event that lasted over five hours. Before the audience entered, the floor was swept, but the three had started. From this start until 75 minutes later is what it is on this CD. Marked as one track which makes it hard to pin favourite passages or skip boring ones (besides being a nightmare for you DJs out there), this is best described as laptop cum MD-J’s, toying around sounds of their own, as well as music from others (I recognized a large portion by the band Goem). They capture some good moments and in some they are searching for a good groove, which is to be understood here in no rhytmical connection. Even when the good moments outlast the lesser ones, I can’t get it out of my head why the entire concert wasn’t edited and the best moments from the entire concert spliced together? A critical, objective ear could have been a great succes I think. Now this CD gets the mark: quite alright. [FdW]

All-Music Guide (USA):
Opening Sweep is Ocsid’s second CD. For this performance, recorded on November 12, 1999, the trio of CM von Hausswolff, Edvard Graham Lewis and Jean-Louis Huhta was augmented by Peter Pfaff, all performing on samplers, computers and electronics. Recorded in a Munich club, this mammoth session started at 10 pm and ended at 3:30 am, but the CD only contains the first 75 minutes. The music covers a wide range, from rhythm-deprived soundscapes to segments of rave-like energy. Sound sources go from ethereal synthesizer patches to snippets of radio/TV broadcast and cheesy ‘60s electronic pop music. The continuous set lacks cohesion: there are moments where it seems no-one is aware of what the others are doing, as voice samples come in and out at random. Things come together and then fall apart again, but someone always manage to keep the piece moving forward. Now, when faced with such an edited set, one must ask the question: why stop here? Why brutally cut the piece at 75:04 instead of 70 or 78 minutes? In the last 120 seconds the music takes a turn toward noise as the texture disintegrates and when it stops on a dime the listener is left clueless. There are stronger experimental sets out there, but this one is intriguing enough to be worthwhile. Not for everybody, of course.