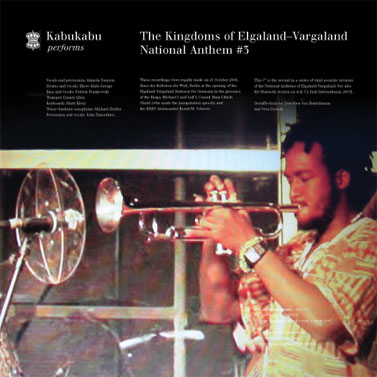 These recordings were regally made on 21 October 2006, Haus der Kulturen der Welt, Berlin at the opening of the Elgaland-Vargaland Embassy for Germany in the presence of the Kings, Michael I and Leif I, Consul Hans Ulrich Obrist (who made the inauguration speech) and the KREV Ambassador Bernd M. Scherer.

This 7” is the second in a series of vinyl acoustic versions of the National Anthems of Elgaland-Vargaland. See also the Mariachi version on Ash 7.2 ~ Ash International, 2007.

2005, after the dissolvement of the then only afrobeat band in Berlin “Rhythmtaxi”, the city witnessed the birth of a new offspring of Afrobeat family christened “KABUKABU”(a slogan used in Lagos / Nigeria for Buses used in transporting the masses. The bus not only transports people from one point to another, but also serves as a medium of desseminating news and messages to the people). A band formed by Akinola Famson, Ekow Brown and Patrick Frankowski (pillars of Afro and Reggae scene in Berlin) alongside with other international outstanding musicians, who have dedicated their artistic life to improving on the legacy laid by Fela Kuti “God father of Afrobeat” , an explosive combination of Westafrica rhythms with Funk and Jazz Americas. Irresistable groove travelling round the globe. KABUKABU stands out as the only unbeatable “Afrobeatdynamite”. Through its new style of playing and the introduction of diverse musical acts as well as other indigenous percussive instruments, the band had added a new dimension into the way Afrobeat is being played, taking afrobeat to another level which conforms with the present musical demands of all music lovers without neglecting the original intention of “ANIKULAPO” the initiator . The band had created a musical delicacy termed “Explosive-Afrobeat” through its mix of HipHop, Reggae, Dancehall, Soul, Funk with african traditional elements. This new dimension enables the band to cooperate and work with other solo artist as well as Dj’s and Mc’s e.g. the collaboration work with exotical musicians like JIMI TENOR, TM STEVENS, MFA KERA…etc. With just one year of refining the left overs of Rhythmtaxi, KABUKABU’s just finished EP with “3 delicious tracks” will be release soon. So stay tuned and watch out when next the rhythm bus is passing through your area.

BERLIN KLEZMER: (the miracle called Klezmer) brings the most cheerful and heart-moving mood in the music halls with its rapid tempo. The four musical souls bring nostalgia, melancholy, love and amusement together in a feeling of life: The Klezmer. Their Klezmer music is particularly facet-rich, since all four musicians have professional music training and an experience of many years. The lovely Band from Berlin, that consists of trained musicians, who originally come from Ukraine and White Russia, plays the original Jewish instruments and the folks music of eastern Europe with a lot of soul and energy.

“We play very gladly at your weddings, birthdays and also all other occasions and guarantee for the fact that, our Jewish folks music that comes from the heart will inspire you will draw you along.”