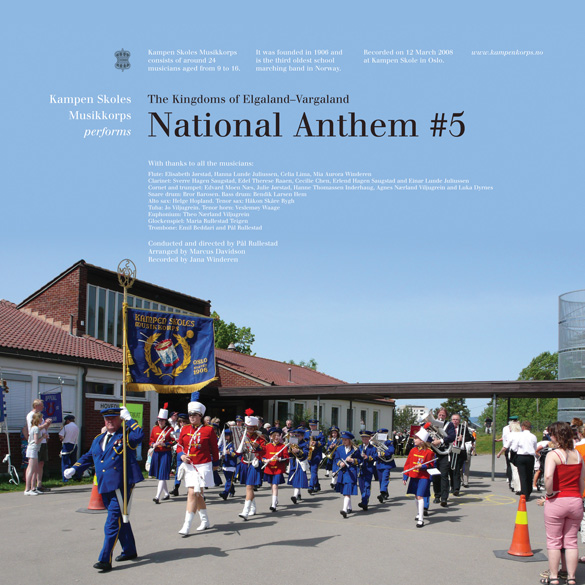 B: The KREV Underwater National Anthem

This 7” is the third in a series of vinyl acoustic versions of the National Anthems of Elgaland-Vargaland. See also the Mariachi version [Ash 7.2] and the Klezmer and Afrobeat versions [Ash 7.4], both issued in 2007 via Ash International

Kampen Skoles Musikkorps consists of around 24 musicians aged from 9 to 16. It was founded in 1906 and is the third oldest school marching band in Norway. Recorded on 12 March 2008 at Kampen Skole in Oslo. www.kampenkorps.no

The KREV Underwater National Anthem was recorded under MS Reichenau on the occasion of the Annexation of the Bodensee (Lake Constance) including Überlinger See, Zeller See, Gnadensee, Untersee and the Insel Mainau (Island of Mainau), formerly a part of Switzerland, Austria, Germany, by the Kingdoms of Elgaland-Vargaland on Wednesday, 28 May 2008. In attendance were Kings Michael I & Leif I, The KREV Ambassadors for Basel, UK and Zürich; The Minister of Galleries and many others. Recorded using Dolphin Ear hydrophones and a Nagra Ares P–11 flash recorder whilst The Emmishofer Brass Band and The Diessenhofen Yodelling Choir performed… With thanks to Adrian Notz at Cabaret Voltaire, Richard Tisserand at Kunstraum Kreuzlingen and Stefan M. Seydel at (((rebell.tv))).