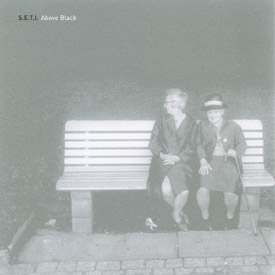 The second in the S.E.T.I. trilogy after Knowledge and before Pod. Concept: The Search for Extra Terrestrial Intelligence should be secondary to the search for those outlanders already present on our planet. TheNational Security Agency and World Defence departments, particularly in America, not only know of their existence but are aiding them with the supply of monitored abduction subjects and E.S.P. – capable Intuitive Communicators. These Grey Projects are hidden behind “above top secret” Black Projects, where not even those orchestrating the Black Projects are aware of what is going on under their command. With the Earth’s population increasing almost exponentially, a catastrophe is being prepared for, or is being prepared for us.

VITAL (Netherlands):
Well, here’s one that soared into my Top Ten list for ’98 within seconds of it starting to vibrate the air molecules at home. It’s a most definite successor to the CD ‘Knowledge’ (1995) also by Mr Lagowski, which was a joint release with Soleilmoon. ‘Knowledge’ was constructed from recordings made with all sorts of exotic space and domestic monitoring and surveillance devices and included what I guess is the declaration of the S.E.T.I. (Search For Extraterrestrial Intelligence) organisation as liner notes. Every time I play any of the tracks off ‘Knowledge’ on the radio, somebody calls to enquire what the title of this amazingly powerful music is. It will surely endure the test of time – much like this new CD, which I cannot help but consider as true ‘classical’ music of our times. The concept behind this music is closer to home, and much, much more threatening because of this. Outlanders roam our planet with the apparent consent of National Security Agencies and military authorities, who are actively assisting these entities with their nefarious abduction and human monitoring programmes for reasons we can only imagine. Of course most scenarios depict mass-control, or a culling of the human species in an attempt to save this planet, probably so that THEY can move in and reap the crops we have yet to sow.

Anybody familiar with the X-Files (to name just the top of the heap) will be aware of this proliferation of paranoid speculation, which is ladled out by so many people and organisations all hoping to get their share of the pie before the fan stops working all together. There’s money in fear, y’know. (Just ask the Christians!) Despite my cynicism, I cannot make up my mind about this topic at all. I am more convinced than not though, probably due to some strange unearthly encounters I have had myself. (Mystery is a good thing – if we knew all the answers, we’d stop looking and probably revert into four-finned bottom-feeders.)

Of course this is not the first time the subject has been used as a concept for a composition (despite separate track titles and indexing, this is one ‘symphonic’ piece to me), and I cannot claim to have heard anything but a drop in this vast ocean. My body tells me that this composition is spot-on, though. Somehow my meat knows these frequencies, my cells respond with harmonic resonances of their own, my skin soaks them up. I feel this music more than I hear it. Crackles zip through simmering, stretched voices which curl out of satellite space like sinister fog. Arctic winds twist through desolate and forgotten steel girders. Sound in static. Static in space. A key to a door in dreams. Innerdimensional. Not for the uninitiated or faint of heart. (MP)

Exclaim (Canada):
The UK’s S.E.T.I. (not to be confused with the New York SETI) is Andrew Lagowski (aka Legion and the rhythm-oriented Lagowski) whose search for extraterrestrial contact lead him to the super-secret “above black” projects probed/parodied by The X-Files. This nebulous world of weird science and alien conspiracies is invoked by Lagowski’s shadowy electronic music, which builds on the deep rumblings of Lustmord (he was once a member) and adds the kind of digital noise constructions explored by the post-industrial underground. The norm of Above Black’s basic grey drone, heard in tracks like the opening “Revelation” and “Ghosts of M31,” is upset by the secret knowledge of processed radio signals and manipulated voices. And when the scene switches to the arctic locale of “Outpost Receiving” a windy expanse becomes a similar platform for coded communications. What are the plans of the aliens among us and their human collaborators? The answer is somewhere between the finely crafted static and hiss frequencies of Above Black.

Last Sigh (the net):
For the past 30 years the world’s most powerful radio telescopes have been scanning the heavens, searching for signals from alien civilizations. This project is called SETI, the Search for Extra Terrestrial Intelligence. It’s an interesting admission of the possibilities of intelligent alien existence, and something that has inspired the themes of countless movies, books, and TV shows. This is the first time I have witnessed it translated into an audio format since Clock DVA’s “Sign” in ’92, which was also the year that saw the first SETI release. There is no percussion on the entire disk, which paves the way for a variety of subtle ambience. Thematically “Above Black” delves deep into sci-fi, and the music itself is just as futuristic. Calm, smooth soundscapes deal with the infection of digitized voices and a textured layer of noises and samples. Near the middle of the lengthy first track, “Revelation”, the sounds sharply escalate into a harsh clamour of noise. The drastic increase in pitch and volume catch you off guard after the opening segment’s drifting tones. It almost acts as an alarm clock in case the intro set you dreaming about aliens. SETI is a solo project from Andrew Lagowski, who is quite serious about this album’s concept. He also disputes the common accusation of too many late night X-Files reruns. “It’s just one idea” he claims, “there are so many possibilities about aliens that I don’t know what to believe. I just want people to think about what might be happening.

Cover (USA):
S.E.T.I. are like Men In Black with synths and drum machines. S.E.T.I. stands for the Search for Extra Terrestrial Intelligence, and this outfit have been turning their eyes and ears to the stars in pursuit of U.F.O.s for a number of years as inspiration for their ambient music. Now according to their mandate S.E.T.I. are looking closer to home for aliens in our midst. Above Black features spooky washes of sound with voices that sound like interceptions of alien dialogues, like Scanner’s recordings of candid phone conversations but not of this world. White noise itself becomes a suspicious source for alien communication, as the alien languages devolve into swirls of electronic blips and random sonic texture. Above Black will certainly intrigue fans of the X-Files and paranormal activity. [DP]

FACT (USA):
If you’re a fan of paranoid conspiracy theory regarding the denied existence of extra terrestrial life, and who isn’t these days, then pick up S.E.T.I.’s new Above Black CD on Ash. S.E.T.I.’s Andrew Lagowski is a subscriber to the theory that aliens are already inhabiting our planet and are being assisted by our government through the supplying of human test subjects. Hmm, well that’s not entirely unbelievable I guess but I have heard plenty of arguments for this theory and I can’t say I’m convinced yet. I think it would help the concept of the CD if Ash would have given Lagowski a little more room to elaborate on his theory in a booklet format. The wb sites listed in the jewel case insert seem a little corny, and one is selling a book of the same name, which perhaps was the inspiration for this CD. Reading this book may shed some light on the CD, but I haven’t (there’s just too damn many of these books around nowadays) and the connection between the music and the concept seems fairly loose. But the music is actually pretty nice. Very well crafted with mysterious voices and radio noises, and an overall feeling of terror. Also is as a bonus a creepy ass cover photo of two old ladies sitting on a bench.