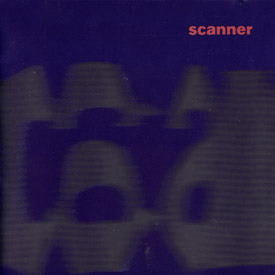 All tracks by Robin Rimbaud.

Ash International announces the release of the first in a series of recordings which challenge the conventional notion of information ownership, and highlight the paradoxes and hypocrisies apparent in theories of copyright and patents.

Scanner also explores the fundamentally voyeuristic nature of communication via technology, and unashamedly reveals and confronts, in often explicit ways, the fraudulent use of power between the sexes. Hear the poetry of sleaze and open up to your own bestial forces.

Only then can you tame the monster within.

Imagine open access to a constant crossed line…Weird! Set to a throbbing soundtrack (Stockhausen in a trance), this miasma of sound and texture features sex, drugs, misery, anger, rage and manipulation. Tune in and eavesdrop on those intimate phonecalls – Hear the man who uses his teeth to castrate sheep. Listen to an eastern mystic with a revolutionary relaxation technique. Cringe as the rentboy searches for his toothbrush and necklace. Despair with a mother who agonises over her daughter’s anorexia nervosa. Quake with fear as hired hand arms himself for his dastardly task. Intercept Miss Ballbreaker coaxing her audience to self-arousal …and unravel the enigma of the prixie cell…

Set to a dynamic and haunting soundtrack – a score for the film of your life;

Mundane, malevolent and bestial? Or sophisticated, tender and transcendent – you decide.

WARNING! This compact disc contains material of an explicit nature. You should be warned that offence may be taken at some of the material on this recording. But you won’t be able to turn it off!

…the reception is fading…