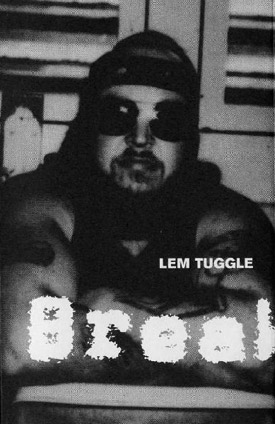 In March 1984, six men escaped from Virginia’s most secure prison. It remains the only mass escape from death row in US history.

This recording was made on death row by Lem D. Tuggle with a pocket cassette recorder hidden in his cell. As a guard approached his cell, Lem had to stop recording, thus accounting for the few breaks in the sound.

The tape was removed from the cassette shell and smuggled out by letter. This is a copy of the original recording in its entirety.

Of the six men who escaped, five have been executed. Only Lem survives… (see below)

The Daily Telegraph 14th December 1996:
“The last surviving member of a jail gang which featured in America’s biggest breakout from death row has been executed in Jarrett, Virginia. Asked if he had any last words, Len (sic) Tuggle, 44, replied, ‘Merry Christmas.’ Tuggle and five others escaped in 1984 in stolen guard uniforms. All were recaptured and the others have since been executed.” [David Sapstead, New York]

Exclaim (Canada):
“This tape is the latest in Ash International’s series of audio verité recordings of spoken word documents and sonic events. Lem Tuggle was one of six death row inmates who escaped in March 1994. In this tape-letter Lem tells the tale of their break-out and recapture, being as he is the only one remaining to be executed. His recounting is an engaging adventure story told in a personable way over the hum-drone of his (illegal) cheap cassette machine. In the second half, he makes touching comments on death sentence politics and his (non) life in prison. You become sympathetic to his problems and appeals (he is still alive today), and no matter what his crime was, realize that despite the stereotypes that the law enforcement industry would have us believe, the inmates of these brutal places aren’t stupid and unhuman. As an anthropological exercise this release is a worthy one and not just more ‘true crime’ voyeurism.”

immerse (UK):
“A spoken word account of Lem and five buddies’ escape from death row in 1984. The tape was recorded after their recapture and smuggled out of prison via letter. Lem’s the only one of the group who hasn’t met with the death penalty to date. All of this, and the reality of Lem’s situation, make this cassette a profoundly disturbing and unique artifact. However, and this truly amazed me, he still manages to retain a sense of humour and a concern for his family and friends’ own lives. This tape doesn’t have the emphasis and delivery of other spoken word recordings. Lem is not an actor. This is real and should be heard by everybody. Frightening and excellent.” [AS]