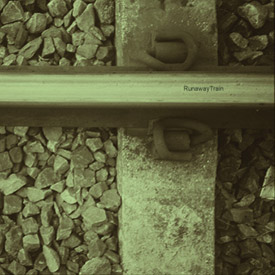 Is that you, Alfie?

This LP is the recording of the conversations that took place between Wesley, a driver on a runaway train, and Alfie, his controller, who taped the entire drama as it happened. While his colleagues work calmly and professionally to prevent a derailment, Wesley bravely remains on board. 55mph becomes 70mph. The dialogue between Wesley, and Alfie, grows tense. The train hurtles on threatening unsuspecting communities. At 95mph, with a doctor and ambulance standing by, Wesley faces disaster. Suddenly the line goes dead. Can Wesley survive?

The dialogue between Wesley, and Alfie, grows tense. The train hurtles on threatening unsuspecting communities. At 95mph, with a doctor and ambulance standing by, Wesley faces disaster. Suddenly the line goes dead. Can Wesley survive? [New Brunswick, Canada 1987]

At the time this LP was released… this story appeared in the British press:

[ON THE EIGHTH OF SEPTEMBER 1994 during a 24 hour signal workers’ strike, the 17.13 London to Sevenoaks was partially derailed after applying emergency brakes to avoid another train.

The driver says he did not pass any signal at DANGER. The signal box was being run by inexperienced supervisors. Both the supervisor’s log and tapes of communications with the train driver were removed from the signal box overnight. Senior rail staff accused Railtrack of a cover up…]

CMJ (USA):
“On March 9th, 1948 (?), a Canadian rail controller named Alfie taped his conversation with Wesley, a driver of a runaway train that had sped up to 95mph, and his own efforts to prevent a disastrous derailment. The recording, circulated among tape-traders for years and previewed on an Ash compilation or two, is presented on this one-sided LP. It’s a real-life thriller with the voyeuristic frisson of an air-plane’s ‘black box’ recording and the mounting tension of, say, Speed. The things that make clear the difference between this and ordinary radio drama, though, are the nerve-wracking (sic) silences (there are moments when the only thing that can be done is waiting) and the problems in communication: the train is loud, the transmission is full of static, and everybody’s desparately trying to keep calm enough to figure out what to do. Listeners will think “what did he just say?” – and then realize that, in the position of the people involved, not understanding a few words could mean the difference between life and death.” [Robin Edgerton/Douglas Wolk]

Top Magazine (UK):
“…Equally absorbing/astonishing is Runaway Train, featuring a dialogue between a guard and a driver of a doomed train, mere minutes before it went off the rails in 1948. The result is harrowing, but also voyeuristic and this is what keeps your hand from straying too near the off-control of your stereo as Runaway Train reaches its disastrous conclusion.”

“True connoisseurs of the curious, however, will no doubt be delighted to learn that Ash International have finally shunted their long awaited (previously previewed) Runaway Train onto the tracks. It may not be the deluxe picture disc version that we were promised, but the rapport between engine driver Alfie and line controller Wesley, mere minutes before his train is about to run off the rails, is one white knuckle ride that bears up to several replays. The talent that Ash International have for picking up on human disasters, tragedies and oddities is to be applauded and encouraged.”