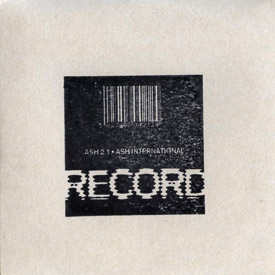 This 75 minute CD features material from the Ash International catalogue. It is aimed primarily at radio and digital DJs. The CD consists of one long track – so judicious use of the pause button is advised.

Industrial Nation # 11 (USA):
“Next up is something on a different wavelength. The Ash International Record Sampler CD is a compilation of material available on the Ash International/Touch label out of England, known for their numerous SCANNER and sound research/phenomena recordings. This 79-minute CD collects tracks from artists like THE HAFLER TRIO/ADI NEWTON, S.E.T.I. (aka LAGOWSKI), STOCKHAUSEN, SEYMOUR/VAN HOEN (a SEEFEEL/Locust collaboration),and SCANNER, alongside recordings made by the US Air Force, the Royal Air Force, and a runaway train. Very compelling, subtle stuff, and since its indexed/mixed into one continuous track, there is little to distinguish between just who did what. Mysterious drones/electronics collaged with intercepted wiretaps, shortwave tinkerings from beyond…truly a suspenseful collection to make your hair bristle on end. To quote KRAFTWERK, ‘Radioactivity – it’s in the air for you and me.'”
Voted experimental album of 1995 by Imperium Magazine, Portugal

EST (UK):
“What a long, strange trip through the minds of the artists and sound sculptors who infect Ash this is. One unindexed track, holding a seemingly random selection of music and interludes from some of the keenest minds around. There’s a groovy airplane going over, here’s old man Scanner plucking more urban despair out of the airwaves, there’s a droning piece of fractured static from that jolly Hafler Trio person, that’s Stockhausen talking about his music. Indulge yourself. Strap yourself down, blindfold your eyes, have something refreshing and reviving ready for when you emerge out the other end. Press play.”