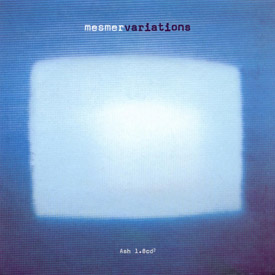 The contributors to Mesmer Variations were asked to record a piece influenced by the work of Mesmer. As a starting point they were given a copy of the LP Mesmer (Ash 1.8), released earlier this year. Side one of the vinyl recording consisted of 999 identical bars, lasting 22 minutes 12 seconds. Side two was made up of an identical piece recorded at a lower octave, and a separate original mix by Resolution. Some have directly built on the pieces on the record; others have started afresh. These works are not remixes: they are original works inspired by the dynamic effect the claims of Mesmer had on the thinking world around him – effects which are still reverberating today.

Franz (Freidrich) Anton Mesmer (1734-1815), ‘The Wizard of Vienna’, was an Austrian Physicist who claimed he could cure diseases by correcting the flow of animal magnetism in the bodies of his patients during séance-like group sessions. Mesmer was offered a large fortune at the Parisian court in 1778, but refused to divulge his secret.

Contemporaries established a commission to investigate his claims, deducing that any cures were due to the power of suggestion – his audience at the time were largely from among the rich Parisian bourgeoisie, and apparently highly prone to suggestibility. His claims, however, did initiate serious studies into what came to be called ‘hypnosis’. His pupil James Braid (1795?-1860) coined this term after the Greek God of Sleep, Hypnos. The Marquis de Puyseacutegur (1751-1825), also a pupil and great admirer, developed theories of the unconscious mind after sending a patient into a trance and discovering multiple personalities.

Even now there is very little serious study of hypnosis, or its bastard offspring, hypnotherapy. It has been sidelined as a form of mass entertainment or a miracle cure for psychic damage. Research is desparately needed to study the influence and effects of ‘the flicker effect'(a form of mesmerism induced by the flickering images of cinema and television screens), the new range of ‘video drugs’, or the effects of listening to repetitive sounds emitted at certain frequencies. Music was an important factor in Mesmer’s work, and he was a close friend of Mozart, later affectionately teased in his opera Cosi fan tutti.
Some of the artists here need no further introduction; others will be new to you. Each one has in their own way explored the possibilities offered within the brief. The result is a highly original, often startling body of work which offers great insight into the myriad of options available to the creative worker.

VITAL (Netherlands):
Releases on ASH have never really failed to interest me. Particular favourites are The Runaway Train (I wish it was on CD ), Aurobindo and S.E.T.I – Knowledge. My only impression of the original vinyl release of Mesmer was that it was good to use in a mix – as an isolated work it quickly bored me, was easily forgotten and does not reside in my collection. Ash have now followed this up with a 2CD package of remixes which far surpasses the original release. The guidelines were simple… composers were given a copy of the vinyl release and asked to compose something influenced by the work of Friedrich Mesmer, animal magnetist and Mozart’s chum. There were no further instructions and the original composition did not need to be referenced at all. What a healthy attitude to the often uninspired field of remixing. The result is 18 tracks spread over two CDs in perfect sequence. Put Put open the first CD with an exceptional track – their first studio recording apparently. Their thick shifting slabs of noise are followed by a spacious track by Koji Marutani. Bruce Gilbert’s piece sort of ‘happens’ as does the track by CM VON Hauswolff. Sandwiched between these two are a liquid contribution by Daniel Menche and a rhythmic excursion by Drome (NUF). Track 7 is an interlude comprised of a Mozart piano loop. The last 3 tracks on CD1 are by Reneacute Hassinger, Steve Williams and Ryoji Ikeda (who wastes an awful lot of digital time by filling it up with loads of silence in an all too long (24 minute) piece. (WRONG! – ed.)

CD2 contains a marvellous set with the exception of Edvard Graham Lewis who once having made his point irritatingly returns several times from fade-outs. SETI, Quest and Robert Hampson provide the glue which binds this 2nd CD together. There is also a contribution from Resolution…is this Mr Colin Newman by yet another name? PITA end this set with a seductive languid dronescape which left me floating in space.
As usual with Touch/Ash releases, great care and attention has been paid to packaging. Mesmer’s life story, work and meetings with Mozart have been chronicled and I think that Kev Martin’s Isolationist Compilation on Virgin may have finally been superseded. Well done …

i/e (US):
“Contributions from all of the above can be experienced – in the presence of notable company – on both the TouchSampler and the concept compilation Mesmer Variations. Aside from featuring tracks currently available or specific to the collection, the sampler offers a fine introduction to the musicians who orbit within the label’s sphere of influence, from Drome and the Hafler Trio’s Chris Watson, to Drome, percussionist z’ev and Andrew Lagowski’s alter ego S.E.T.I., who bend frequencies into radio-derived fractals. Lagowski contributes to Mesmer Variations, which finds some of the planet’s prime experimentalists sonically interpreting the concepts and notions of Austrian physicist Franz Mesmer, whose developmental work became what is commonly known as hypnosis. The roster of artists involved is a hearty cross-section of emerging and emergent names from contemporary electronica – Robert Hampson, Drome, Ryoji Ikeda, Frans de Waard, Gescom, former Wir-boys Gilbert, Lewis & Newman (sic) – although especially noteworthy is the Thomas Koner-like morass exhumed by Drome. Housed in a plastic pouch with accompanying placards detailing biographical and scientific data on Mesmer’s work, plus the musicians’ realization of all things aurally ‘mesmerizing’ make this one of the more lucid and musically fascinating compilations of ’96.” [Darren Bergstein]