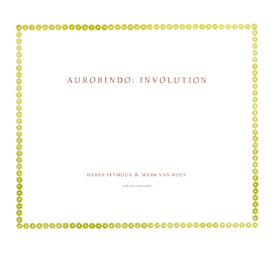 Aurobindo: involution is a new album from Daren Seymour of Seefeel (Warp Records) and Mark Van Hoen of Locust (R&S Records). A journey in sound that summons the source of spiritual energy.

The Wire (UK):
“This is what they want” jokes the run-off groove; if more listeners enjoyed the sound of looming B52 bombers, this might be true. This album of illegible, deep throated drones, windswept, glistering resonances and treated boffin-voices by Seefeel bassist Seymour and ‘Locust’ Van Hoen gives some clue to Seefeel’s recent sandblasted Succour album. A more interesting, yet commercially unsustainable, carrer lies before him. There’s a prize offered if you can solve the mystery of the track titles and dates. “Sir! Sir!”
…also featured in The Wire’s Chill Out Zone 15 chart compiled by Paul Thomas of Kiss FM, who plays it regularly on his late show.

Melody Maker (UK):
“They don’t come much stranger than this; a collaboration between Seefeel’s Daren Seymour and Mark Van Hoen aka Locust. A radical departure for both parties comprising of intense drone tracks and Cage style minimalism. For Cabaret Voltaire fans and freaks alike.”

What the DJs said:
Robert Webb, Club 303 DJ
“Brilliant! This will be in my box forever. Finally a cure for those awkward records you cannot mix, so you just stick it on and create an atmosphere.”

T. Global
“Great concept – inspired me to do a weird tape straightaway! I like the philosophy behind the label and will look out for future releases/checking back catalogue.”

Simon Mu, Basics
“I’ve been charting this highly too!”

Richard Brown, Sonora/Sweet FM
“Ash are a well-renowned label, most of their releases are very well known in the weird music fraternities but I can see no harm in Ash crossing over and being enjoyed by the general music public. It was a very good idea to bring out the Sampler.”

Simon White, Deluxe/Beetroot
“This is superb. Tony and I were running around ecstatic about this…there should be more of this stuff. Charted at no.7.”

The Egg, Megadog/Untiy/Dream FM/LSR/Paradox?Cafe Mex/3 Minute Culture
“Interestingly far out and experimental. The odd track can certainly be used in ambient sets. Also makes good use as track fillers and sound FX for mixing.”

The Promoters, Zzonked, were surprised by how many DJs not noted for being way-out played and charted this record. It was played on Kiss FM, Groove FM and Dream FM radio here in the UK.

The Empty Quarter (UK):
“Amazing Seefeel and Locust collaboration. Highly resonant tones wander through a repetitious void. A hugely cavenous interior is filled with sampled bells, chains and other non-definable source material. Even the sequenced quasi-electronic Supermind’s Light Becomes Part of the Earth is tempered with surrounding static pulling away from any vision of standardised technoid territory. The ten minute Battery Ending is a full, unrelenting force, shifting pitch until…its gone…Involution is is a remarkable recording and not only for its immense and fathomless production quality. More please.”

Phosphor (Netherlands):
“Daren Seymour of Seefeel and Mark van Hoen of Locust combine forces as Aurobindo, to create the ‘Involution’ album, a journey into sound that summons the source of spiritual energy. Fucking beautiful, hypnotic and spacey. At first, there is a certain coldness hanging in the tracks, but after a couple of times listening you’ll find that Aurobindo creates fantastic sound scapes that can’t simply be labelled as ambient anymore. An absolute must!”