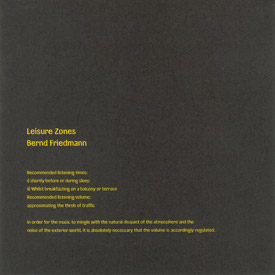 Bernd Friedmann reveals his true nature as an experimentalist, foresaking his more melodic work, for a 77 minute soundscape. ‘Leisure Zones’ offers an alternative to the state many people find themselves in; as passive consumers of leisure. But the increasing inviability of this option due to environmental destruction will force us to modify this existence. The West is overloaded with used and unsold hardware; the very pile is threatening to topple over and crush us all.

But the intimate world of auditory pleasure (including silence) presents an alternative to this miasma.

Bernd Friedmann is from Cologne. Cologne is a large city on the Rhine (pop. = 1 million approx.), originally founded by the Romans. It was virtually totally destroyed by heavy bombing in the Second World War by the R.A.F.. The city is dominated by the twin-spired thirteenth century cathedral, a major European tourist attraction, and the gothic town hall. Most of the buildings were rebuilt after the end of the war, and Cologne is now a flourishing port and industrial and commercial centre.

Magic Feet (UK):
“You may have heard of this guy through his output as Drome, Some More Crime and Nonplace Urban Field. To call this ‘music’ is pushing it somewhat; it’s more of an environment, another world even, to let yourself wind down in. Except that after 14 minutes of low volume urban noise (sounds boring but it’s actually blissfully relaxing), the sound of a rapidly approaching electric arc weld is succeeded by a popping explosion, which caught yours truly completely off guard and basically scared the shit out of me. You too, hopefully, when you hear it. It’s staggeringly how much is conjured up by what appears to be so little over the 77 minutes of this one-track sound installation. Half the time there is literally just silence, but it’s all so affecting. John Cage knew, the silence between the sounds is at least as important as the sounds themselves. Way out there on planet sound. Excellent.” [Andy McCall Smith]

i/e (USA):
“The omni-dimensional Bernd Friedmann is one such musician. Having already forged an identity doing shockwave techno (as Drome) and experimental dub (as Nonplace Urban Field), he’s tuned his antennae to the Eno meridian on Leisure Zones. In the purest sense, Friedmann’s constructed a textbook example of Eno ambient music: barely discernible tones seem to evolve out of a sub-atomic abyss, cycle, assume quesily tangible shapes, and eventually blur into sudden sonic ellipses that vanish as soon as they appear. As Friedmann suggests in the booklet, this is music set to accompany low-level activities, sounds that approximate the late evening throb of traffic flow. Nevertheless, Nevertheless, at any volume level this is prototypical environmental music, minus the frothy rhythmic baggage that resides in much of today’s mislabeled ‘ambient’ music, and is as definitive a piece of non-participatory sonic art as anything done by BE himself.”

EST (UK):
“This release comes along with listening recommendations printed on the cover. Friedmann suggests that the perfect (correct?) time to listen to this environmental piece is, “shortly before or during sleep”. Failing that, he suggests another possibility – one where the listener eats breakfast on a balcony or terrace with the CD volume set a at roughly that of the outside audible traffic. He goes on to say that “in order for the music to mingle with the natural disquiet of the atmosphere and the noise of the exterior world, it is absolutely necessary that the volume is accordingly regulated”. Friedmann is delving into the same kind of areas that Cage explored with his silence piece (4′ 33″) or those Eno went after in his ambient series. He is mimicking and adding to the surrounding environmental (ambient) noise that is with us no matter where we are. This release does not however sound anything like Eno’s work. Indeed the most obvious comparison would be The Hafler Trio and an album like A Thirsty Fish. The music slithers and groans, intermittent pulses of white noise ease from the speakers, the sound of traffic appears in the far distance, thunder rumbles and water splatters into water. It is a most evocative listening experience, one where outside noise or sound only adds to, never detracts from, the overall cohesion of the piece.” [NC]