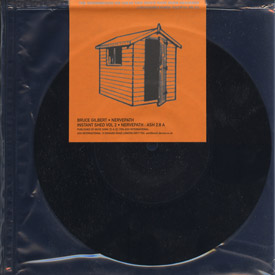 Volume 1 was released on the US label, Sub Pop. Bruce Gilbert is a founder member of Wire, Wir and Dome. He also appeared on Mesmer Variations and Antitrade.

immerse (UK):
“I haven’t even played this as I don’t want to ruin the exquisite grey plastic shrink wrapped packaging. But as it’s Bruce Gilbert I can pretty safely assume that it’s gonna be noisy and buzzy. Both 7″s are one-sided; DJ Pita from Mego played the blank sides and told me they sounded just like normal Bruce Gilbert fare. Highly recommended then.” [mFr]