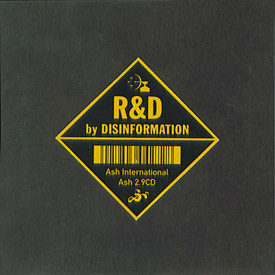 Immerse (UK):
“A pure experimental release by Joe Banks’ Disinformation project. When you realise just what sound sources have been utilised for this project, the fact that its ‘difficult’ listening doesn’t matter. This is the noise of the world doing it’s own thing. mFr”

Wired (UK):
“WHALES ARE FOR WHIMPS – Of all possible sub-genres, “Hardcore Ambient” sits right alongside “Christian DeathMetal” as one of the most unlikely. Still, this is the best way of describing the uncompromising R&D by Disinformation. Forget your seals and your pygmy chanting – this is ambient for real men, a voyage of discovery to the radio spectrum’s lowest reaches. Eight tracks parade the strange inhabitants of this world before your ears. Delicate natural phenomena (Magnetic lightning, leaf statics and sky-wave atmospherics – this is what particle physics sounds like) couterpoint man-made curios: broadcast data, time codes and a Numbers Station. All are presented in a bracingly direct fashion (no effete drum loops) and come with exhaustive technical details and a bibliography. Too often, ambient musicians invoke John Cage’s “environmental music” aesthetic to hide a lack of worthwhile ideas; it makes a pleasant change to see Disinformation give it a new spin via a gene splice with early Stockhausen. After a session in the analogue hot tub, you’ll ned a cold digital shower.” [James Doheny]

Vital (Netherlands):
This is the third time Joe Banks AKA Disinformation has appeared on an Ash release. First up was Ghost Shells a mini-LP issued with dire warnings regarding the safety of your speakers which was followed by a track on The Fault In The Nothing, the latest Ash compilation reviewed in this bulletin Issue # 34. Joe dabbles in the nether regions of the radio spectrum, recording sounds which float in through this particular acoustic window. The liner notes, though brief, are beautiful, and they read like a surrealist poem…’ storms crackle: biostatics whisper, hiss and sigh: televisions scream: pylons and power loops drone and roar: military signals, the musical pulses of navigation systems, timecodes and the coded data broadcast deep beneath the sea…’ The sound structures on the CD buzz and hum with the suggestion of information…the compositions are mostly brittle structures comprised of a few layers. The colors of the sounds are sharp, angular and, on occasion, quite disturbing. R&D Track 6 sounds like a sophisticated piece of gardening equipment now in control of it’s own destiny cleaning up in a toddlers playground ( or is it just my imagination ? ). My favorites are Track 1, which includes grass insect and leaf static’s amongst it sound sources (all sources are listed and they read like the ingredients of an alchemical formula from a future world). Track 8 is great too; perhaps this is because of the inclusion of an unidentified harmonic motif recorded from a HF broadcast . A compelling release.

On (UK):
“Art CDs that reveal the invisible and leave you wondering if your CD player is broken. R&D is a collection of unusual electromagnetic activity – insect, leaf, earth and sky statics, radio navigation broadcasts, subaquatic coded data, pulsed and continuous very low frequency (VLF) data. No way of proving this, you’ll just have to believe the sleevenotes. Sometimes barely audible, sometimes quite unpleasant and occasionally uncannily ‘musical’, this will cause miscarriages amongst neighbours and stop birds nesting in your gutters. Suggested reading in the sleevenotes is Modern Radio Science 1993 and Jane’s Military Communications 1989.”

Magic Feet (UK):
“Upping the ante further still, Disinformation’s third album for Ash sees them scaling new heights of clinical detachment. Forget Speed Metal, forget Gabba House [I already have, mate – Ed], this is by far the most anti-social noise in the world, which is the supremist irony because none of us can hear it in everyday life. And yet it’s around us constantly; the ubiquitous, inaudible sound of radio and communications signals pulsing across the globe in nano-seconds. Inaudible, that is, until it’s captured on, for example, track 2, a ‘Pulsed VLF Broadcast Data. Lafayette HA800, Datong VLF convertor&100 Random Antenna’ and fed through your CD and ampifier to create an unholy wall of noise that would scare warts off Lemmy’s chin. Undeniably academic, but also fascinating if your mind is open far enough.”

New Powers (Canada):
“While the heritage of industrial music is increasingly tied in with rhythm programming and metal riffs, underground experimenters continue to seek out new sounds free from popular forms or notions of beauty. But in the case of the discoveries of England’s Joe Banks what could be more beautiful than the secret sounds of nature? R&D is a remarkable piece of noise music made from those hidden radio frequencies where the whispers of atmospheric electrical activity and the crashes of static are heard. Add to nature’s silent (to us) cry the strange world of exotic radio frequencies and you’re in a brave new sound world of acronyms like SEPAC (Space Experiments With Particle Accelerators, 50 Hz ELF>7 kHz ELF) and INSPIRE (Interactive NASA Space Physics Ionosphere Radio Experiments, 3>15 kHz VLF). What’s up in the MIR space station? What’s shaking with the Ground Wave Emergency Network? Joe Banks listens into the coded chatter of submarine communications and doppler-shifted military radio navigation channels. With specialized 100′ antennas, low frequency receivers and signal converters Disinformation blinds you with science before knocking you out with sound. You’ve heard of new wave and darkwave, are you ready for “long wave”?”

Exclaim (Canada):
“While the heritage of industrial music is increasingly tied in with the rhythm programming and metal riffs, underground experimenters continue to seek out new sounds free from popular forms of notions of beauty. But in the case of the discoveries of England’s Joe Banks what could be more beautiful than the secret sounds of nature? R&D is a remarkable piece of noise music made from those hidden radio frequencies where the whispers of atmospheric electrical activity and the crashes of static are heard. Add to nature’s silent (to us) cry the strange world of exotic radio frequencies and you’re in a brave new sound of acronyms like SEPAC (Space Experiments with Particle Accelerators, 50 Hz ELF >7 kHz ELF) and INSPIRE (Interactive NASA Space Physics Ionosphere Radio Experiments, 3>15 kHz VLF). Wanna know what’s up in the MIR space station? Who’s down with the Ground Wave Emergency Network? Joe Banks outflanks Scanner and listens into the coded chatter of submarine communications and doppler-shifted military radio navigation channels. With specialized 100 foot antennas, low frequency receivers and signal converters, Disinformation blinds you with science before knocking you out with sound. You’ve heard of new wave and darkwave, are you ready for ‘long wave’?” [Chris Twomey]

EST (UK):
“Had enough of music? Heard too much John Cage or Bernhard Gunter and ready to go further out? OK, it’s time for Disinformation. Guaranteed 100% music-free, in fact. Instead, on R&D you geteight tracks of radio recordings, scanning the very low frequency spectrum. One minute you’ll be listening to minute pops and crackles, later the sort of highly rhythmic white noise that would make a fine early industrial backing track. As this record amply demonstrates, there’s some pretty strange stuff out there on the parts of the radio spectrum far from where we normally tune to. Whether it’s background atmospherics, an electrical storm, or a military broadcast, it’s difficult to tell, but some of the sounds documented here are absolutely incredible. Some even make you wonder why Merzbow and co bother. The final extract (listed as “Unidentified HF broadcast”) will have you wondering whether there’s a hoax element involved, as what sounds like a bizarre musical box gives way to what mike just sound like alien beings chanting “6 6 6” repeatedly. At least, it did to me. It certainly becomes easy to understand why so many radio pioneers thought they could use the technology to communicate with the spirit world….Ghost Shells is even less musical, the first side consisting entirely of pops, crackles and nearly inaudible high-frequency squeaks. The second (Data Storm) could be atmospheric white noise, or a computer data tape, both having similar sound characteristics in any event. Noise fans should love it. Ash International suggests the album is an “experimental wild-life recording”, but I prefer to believe that radio hams are being hoaxed by a secret satellite broadcasting station loaded up with endless loops of Aube and Bernhard Gunter albums.”

netzine (USA):
“Joe Banks is an experimental musician with a most unusual orchestra at his disposal. He conducts the sounds which exist around us in a microsonic nature, statics and energies both natural and man-made. Banks taps into the ultrasonic transmissions of satellites, antennae, plants and insects, field probes, and such celestial phenomenon as lightning, solar winds, and the refractive properties of the magnetosphere and provides audio snapshots of a very noisyworld. If our definition of silence amounts to the absence of conversation, Banks reveals that we couldn’t be further from the truth. Turn up the ‘hidden frequencies’ – amplify the LORAN-C VLF (the Very Low Freqency radio band; <30kHz) broadcasts and AC harmonics – and you’ll hear the incredibly abrasive sounds of the universal machinery. Invisible gears grind with industrialferocity (try track 3 of _R&D_), soundfields in flux crackle with pent-up energy, lost broadcasts dance in fathomless space. That ‘silence’ we hear describes a music and mathematics of the most extraordinary design. The resonating hum of the digeridoo and bullroarer … the percussive sustain of a piano … the bowed-harmonics of a violin … the hollow thunderings of the tympani and the tamboura – the Universe has encrypted all of the blueprints and stored them within the fabrics of Life, metal, and the air itself. Banks shows that texture and rhythm predominate within the seemingly chaotic rumble and drone. This secret tonal complexity suggests that humanmusic is merely a subconscious reaction, as natural a process as the wind or the birth of new worlds. The contradictory nature of silence is examined again on _Ghost Shells_. Banks dedicates this 12” mini-LP to the research of Heinrich Georg Barkhausen, a physicist whose wartime experiments with signal interception led to a greater understanding of electrical/atmospheric acoustics. The detection of ‘ghost shells’, anomalous signals interpreted as the “discharges of spectral artillery… across the warring skies of Europe,” was originally blamed on mechanical glitches. But these phantom bursts actually result from a natural phenomena – the refraction and transmission of electrical signals through space by lightning! The same effect which produces bursts of static on TV and radio during storms channels radio signals through the atmosphere. They frequently emerge “close to the geosynchronous point in the opposite global hemisphere.” Side-A of Banks’s “Ghost Shells” investigations examines the effect by amplifying the VLF and tracing the paths of dispersed sound over five minutes. A steady high-pitched – almost undetectible – whistling is broken up by burps of interference. The surprisingly riveting study, recorded at Lewes Prison and severely limited by the constraints of recording extreme frequncies to vinyl, is virtually inaudible at a low volume. But be sure to turn the knob (or digital control) waaaaaay down for the B-side. “Data Storm [parts i,ii,iii,iv,v]” is an overwhelming assault as high-tension static tears through an indescribable wall of sound. Intense, bracing, and revelatory, this twelve-minute stretch is one of Banks’s most accessible and effective ‘pieces’. Once you’ve been caught in Disinformation’s data-storm, the conventional Japanese and Industrial expressions of the ‘harsh’ frequencies sound almost laughable.”