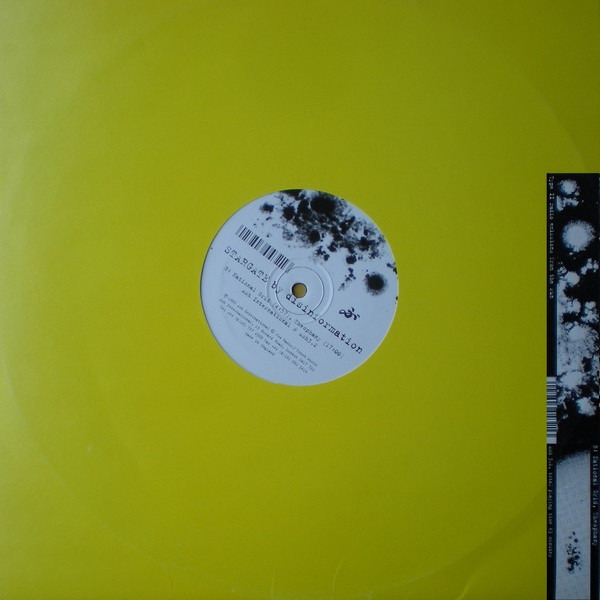 LP
Side 1 – Stargate (parts i and ii) – For the first time in recorded history, Disinformation present a unique record of type 2 (sun spot) radio emissions from the Sun – noise storms associated with sunspot activity known as ‘the seashore effect’.

Side 2 – i) National Grid – 50 Hz ELF and upward harmonics ii) Theophany – a medium wave recording of an electrical storm somewhere over southern England in June 1996. This is a new digital recording. An analogue version appears on A Fault in the Nothing (Ash 2.6CD2)

Two examples of the cataclysmic effect of magnetic storms induced by surges in solar wind associated with sunspot activity – On 12 Nov 1960 American astronomers detected a huge explosion on the surface of the Sun. Six hours later a gigantic cloud of hydrogen gas, 16 million km across and travelling at 6,400 km/second, collided with the earth. Its effect on the earth’s atmosphere was to start worldwide electrical storms and black out all long-distance radio communications for hours. (Jane’s Spaceflight Directory, ed. Reginald Turnill, 1988-9) During the small hours of a cold Canadian night, the voltage of Quebec’s.

Seconds later the lights went out across the entire province. Some six million people were without electricity for nine hours. Within two days, NASA had lost track of some of its spacecraft and the Northern Lights were glowing in the sky south of London.
Hazel Muir, New Scientist, 3 February 1996

ECLECTRICITY UK):
‘For the first time in recorded history..’ Literally heaven-sent, these atmospheric electricks recorded by J. Banks come from type 2 (sun spot) radio emissions from
noise storms of the Sun. The sounds are quite incredible, and anyone interested in concrete recordings will find them fascinating. [DKH]

New Powers (Canada):
Disinformation Stargate Ash International UK LP $TBA 3 trax, 43m Another remarkable release from Joe Banks, the collector of obscure radio frequencies.
Side 1 – Stargate – Pt 1 6.30 Pt 2 14.33 “For the first time in recorded history, Disinformation present this unique record of type 2 (sun spot) radio emission noise
storms from the Sun (recorded at 13.8 MHz). The sonic effect is akin to standing on a beach where heavy rollers smash onto the shore, hence it is widely known as ‘the seashore effect’. Side 2 -“National Grid” 4.57 This sounds like a motor revving as solar flares black out power grids near the magnetic north pole (ie Quebec, US radar, UK etc). 50 Hz ELP & upward harmonics. & “Theophany” 17m – a medium wave recording of an electrical storm somewhere over England in June 1996. This sounds like static so don’t check your needle or stereo connections! Lightning induced high frequency atmospherics, electrical storm recorded at 3.95 MHz.

An analogue version of “Theophany” appears on the A Fault In The Nothing compilation.