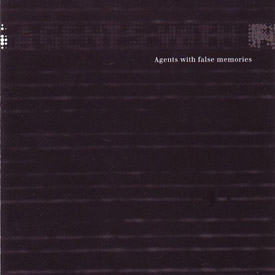 When Guy Debord’s publisher, Gerard Lebovici, was assassinated on March 5th, 1994, Debord resolved never to allow his films to be shown again in France. This murder was no coincidence, he was sure, but a matter directly attributable to the clandestine forces in existence within the French State – forces similar to neo-fascist groups in Italy or death squads in El Salvador. His highly innovative attempts at theoretical film threw down a challenge that has not yet been taken up, despite all the time that has since elapsed – only one small group from the US, using video, have tried a similar theoretical critique of the modern world in Call it Sleep. That is, until now.

Oregon-based Guy van Stratten has continued in this line. In his film agents with false memories he has also used a plagiarism of images to form an accumulation of détourned elements taken from advertisements, newsclips and cinema. This ‘cut-up’ technique was also applied in the making of the soundtrack with the assistance of Richard H. Kirk in February, 1996. What you are about to hear is a live accompaniment to the existing visuals made at Western Works Studios in Sheffield.

This CD was released in association with Soleilmoon Recordings.

Vital (Netherlands):
‘Agents With False Memories’ (sounds like a phrase Marshall McLuhan might have coined) is an engaging and threatening hallucinogenic trip through broadcasting media. It’s a bit like Dicky, armed with (sometimes grossly overloaded) delay, an artillery of analogue sounds, breakbeats, some fat Kirkian drum programmes and some (possibly) prepared tapes of radio/tv quotes went into his studio and jammed for a while finally arriving at 55 minutes of suitable material. Mongers of arms rub shoulders with the operatics of soap in an exercise in recontextualisation which makes even Blue Peter sound like part of an international conspiracy. Voices of angels, both dark and light, dispense (mis)information…their forked tongues flicker in and out of shiny, moonlit pools of tv-induced alpha-awareness.

Richard’s preoccupation with digital media and surveillance crops up repeatedly and there is much to discover in this multi-layered exploration of our media environment. Probably extremely disturbing if you’ve had several mikes too many of lie-surge icky-acid…and I would recommend checking out Stefan Tischler’s CD ‘Excess Of Free Speech’ released on Extreme some years back…beatless but full of similar information.
Best LOUD!

The Sheffield Telegraph (UK):
Kirk Goes Solo
“RICHARD H. KIRK, who makes his first solo appearance at Livemind at the Arches nightclub opn January 24th, is the man behind a new album, Agents With False Memories. Not that you would know it unless you were concentrating as the CD gives virtually no clue as to the perpetrator. Which is a shame because it is one of the former Cabaret Voltaire member’s most impressive works…..since the last one, Dark Continent, by one of his many alter egos, Sandoz. There is just one track, clocking in at 53 minutes, but the music is a swirl of repetitive, echoing noises punctuated by hard dance beats and a rum selection of sampled voices, which includes, unless ears are being deceived, guest appearances by everybody from Blue Peter to Chris Brain.” [Martin Lilliker]

Magic Feet (UK):
“…if you believe high art and dance music have a common ground this is as good a reference point as you are likely to get.” [Jez Torrance]

immerse (UK):
” Richard H. Kirk, of Cabaret Voltaire fame returns once more with a 60 minute piece of instrumental trip hip hop. A clever media collage of speeches, adverts, samples and issues underpins the very nearly everpresent rhythm as it progresses from ambience to full on funkiness, before settling into an ironic, punctuated groove. Unique and politically correct, this is the sort of creation Kirk should concentrate himself upon.” [mFr]

Plus (USA):
“The undisputed yet unheralded master of textured electronica, Richard H. Kirk laid the foundation of experimental music in the mid-70s with Cabaret Voltaire and later with Xon, Citrus, Electronic Eye and Sandoz. As influential as any one person to the modern ambient scene, Kirk established himself as one of the groundbreakers in an entirely new sound. His hypnotic rhythms suggested today’s trip hop and trance while his politically-charged samples urgently, vaguely conveyed the problems of a post-industrial world. This new release amazes me. One track extends 53 minutes through the length of the entire CD. Kirk’s unsettling samples are carefully chosen from the Sex Pistols to Orson Welles, and they counterpoint the swirling, ominous noise and layered rhythms. Agents with False Memories adds to Kirk’s already impressive discography and proves that he still has lessons to teach today’s artists of electronica.” [Da5id]