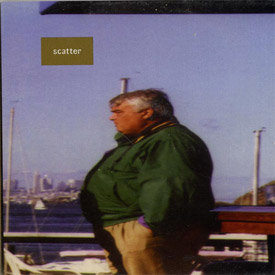 This is the second of a triptych, which was commenced by Chiky(u)u [The Japanese Compilation] and completed with Decay [The European Compilation]
Kevin Drumm
John Hudak
Earth
Jim O’Rourke
Daniel Menche

VITAL (Netherlands):
“Part two of a triptich (after ‘Chiky(u)u’ with Japanese music), this time with 5 US composers. Two of each well-known (Jim O’Rourke and Daniel Menche), one known to incrowd only (John Hudak) and one Kevin Drumm and somebody by the name of Earth. Kevin Drumm opens up, but is not the best choose. The noisy piece of static drone is quite uninspired. Hudak’s piece is much more interesting. Reverberated environmental noise of wind… maybe branches broken in a tunnel… maybe fireworks recorded in the sewer… it is an open piece for inpiration. Earth is a guitar piece, howling like Loren Mazzacane Connors – quite nice, but maybe out of place? Or maybe, taken the fact that it is the middle piece, a right decision. Jim O’Rourke crackles and rumbles in the lower depths of hearing range. Sharing the good moments of Bernard Gunter (and that is a lot) with say maybe the digitized glitches of Oval. By far the best piece on the CD. Another wunderkind of our days, Daniel Menche, exercises once more the high picthed drony sounds of rubbing microphones in the basement. With the usual high impact. In general a diverse compilation which scores 4 out of 5. Not bad at all.” [FdW]

ennui (USA):
“This five song compilation is the second in a triptych (chiky(u)u was the first, decay will be the third). It’s full of the experimentalism Ash is known for with new tracks from artists such as Jim O’Rourke, John Hudak, Kevin Drumm, Earth and Daniel Menche. The Drumm track is his first released material, and while its best place is here as the opener, it’s still the weakest track, with alternating tones of grinding feedback. Neither harsh enough to be impressive or dynamic enough to be interesting. Aside from the Drumm track and the guitar dirge of Earth, the rest of this disc is very avant garde ambient. These three artists really make you turn it up to hear all the interesting nuisances of what’s happening. The best track is the 15+ minute long “Unholy Cricket Fuck” by Daniel Menche, which manages to cover a variety of grounds in terms of atmosphere and sound without retreading itself haplessly. For those into avant garde experimental music, this is a decent compilation. Rating 7.5″

The Sound Projector (UK):
“Investigate this Trilogy or Triptych of compilations as soon as possible. A tripartite electronic and field recording international survey, mostly new artists from (respectively) Japan, America and Europe…all extremely strange and worrying sounds, and even if you like droning Ambient noise you may find some of it a bit too far-out for your tastes. As a listener, you’ve got to do some of the work yourself. Little of it is actually ‘musical’ at all, deriving from other sound sources. The project almost comes across like an antidote to music.

Scatter – the second in the trilogy showing our Mother Earth theme is taking off in a big way. Agriculture is one key; the first part offers the sound of the earth crying, in part two the farmer plants his crop, ‘scatters’ his seed. For further detail, perhaps the secret blueprint is another Touch-distro release Farmers Manual. Nature allusions are evident in the titles of the five tracks here, John Hudak’s ‘Sketch of a Field’ and Daniel Menche’s ‘Unholy Cricket Fuck’, and the third artiste is simly named Earth. ‘Cricket Fuck’ suggests a crop failure on a par with the disaster in Days of Heaven, as a swarm of locusts invade in a beautifully photographed vignette. Menche’s visceral power is no less persuasive.”