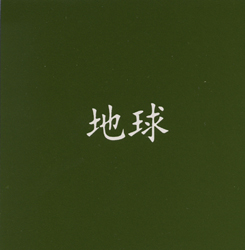 This is the first of a triptych, which was followed by Scatter [The American Compilation] and completed with Decay [The European Compilation].

“Part one of a proposed series of three slickly presented CDs documenting the international ‘Zen and the art of microtonal brick resonance’ scene.

Chiky(u)u presents the Japanese approach to recording naturally occurring sound. Ten new sound artists, including Akifumi Nakajima’s Aube project and a whole host of previously unheard circuit burners, are set loose on a series of contorted field recordings ‘gathered from the earth (stones, water, etc) or ctivity resulting from movement in the earth (earthquakes, etc)’. As far as CDs go its pretty ‘interactive’ with lots of secret tracks (97, to be precise!) and blank gaps. Rewinding from track one triggers ‘Quake’, a stereo shakedown high on the Richter scale, like a CD with teeth, gnawing away at your sense. Felow entrants in the howl stakes include Hatohan, whose ‘Eldorado’ is the sound of hurricane winds being sucked through tunnels, with phantom train carriages sparking on the rails dissolving into Buddhist bells and flowing water. Possibly the most unsettling of all is ‘crackstratum’ using only the ‘the sound of the Ground Stones’, holy stones that seem to speak (the ‘everything is vibration’ school of thought). The stones drone darkly, like drunken didgeridoos beneath a patiently dripping tap, until Nakajima starts skelping them with a large stick while his belly rumbles. They soon shut up. Another stand out (and every one’s a boggler) is Tamaru’s ‘Water Margin’, generated by ‘attaching electrodes to the bank of the Arakawa River’. It’s a hymnal of silent hum with occasional deep Morse Code blips bubbling to the surface while downstream a music box spins. “Listen, the snow is falling,” Yoko Ono once sang. We should have done at the time, but collected here are many invigorating attempts to do just that. Listen, the planet is humming.” [David Keenan]

VITAL (Netherlands):
“CHIKY(U)U (CD Compilation by Ash International) Chiky(u)u is japanese for Mother Earth – in case you didn’t know. This is the first part of a trilogy of compilations, (this) one with Japanese artists, ‘Scatter’ with US artists, and ‘Decay’ with European artists; all in handy plastic wallets. As we know, mother earth is shaking some parts of this world, so it may not seem to be a big surprise that a lot of these pieces refer to earthquakes, ground, stones, topography etc. There is a hidden track (put your finger on the rewind button, at the beginning of track 1 until it really can’t be rewinded any futher) and this is an anonymous recording of a quake. Part of this musical geographical journey is by well-known noiseheads, such MSBR and Aube, but they remain all very subtle on this compilation. Apart from these, there are also people from Japan that I never heard, like Aira Yamamichi, Toru Yamanaka, Tamaru or Hatohan (who delivers a great piece actually). Most of these pieces have sampled sounds of processed environmental sounds, that are in general very subtle. Tak++ high frequency experiments reminded me of Ryijo Ikeda’s stuff. So jap-noise freaks are warned: this is not over the top noise compilation number 1000! After track 10, there follows another 87 index points on this CD, all fits with silence and noiy outbursts – i.e. more fun to shuffle around. This compilation is well entertaining and an absolute must to get.” [FdW]

New Powers (Canada):
“Ash International label: Various Chiky(u)u (Mother Earth) UK CD
10 trax, 78m Very good experimental and industrial trax from Japan. Interesting sound sources and not just over the top power electronix. 1st of 3 compilations featuring artists from around the world. Followed by Scatter (The American Compilation) and Decay (The European Compilation). The Japanese one’s sound pieces are gathered from the earth (stones/water etc.) or activity resulting from movement in the earth (earthquakes etc.). The releases come in a gatefold plastic wallet.

feedback monitor column for June, 1997 issue of Chart (USA):
“The column ends this month on a dark and noisy note with Chiky(u)u, which is Japanese for “Mother Earth” and the name of a compilation disc from Ash International. It features some of the best from the Japanese noise scene (MSBR, Aube, Hatohan, etc.), and all of the tracks are constructed from various sounds of the Earth, including earthquakes. In fact, one of the most intense pieces is an uncredited work entitled “Quake” which is ingeniously “hidden” on the disc before track one so it can only be accessed by hitting the reverse button as the disc play begins. The disc is also the first in a triptych of compilation releases presenting dark experimental works from around the world, with subsequent volumes being entitled Scatter (American artists) and Decay (European). (Contact: Ash International, 13 Osward Road, London SW17 75S, UK; http://www.touch.demon.co.uk)”

Under the Volcano (USA):
“Following the brilliant Antiphony compilation comes the new Ash International release, Chiky(u)u, consisting of recent sound experiments from Japan’s new school of electronic sound sculptors. During the past few years a lot of Japanese noise (in the form of Merzbow, Hanatarash, Masonna, etc…) has penetrated the US market. In 1984 such work was shocking in its high powered assault, but today it seems fairly one dimensional and tired, since almost no progress has been made by these artists. The new school of Japanese electronics, as documented here in the sound scapes of the highly prolific Aube, MSBR, etc… is slightly more interesting. These artists employ a greater degree of texture and electronic processing in their sonic explorations. As has usually been the case with Japanese electronica, the recordings are lo-fi. Four track gear, contact mics and minimal equipment is used to maximum effect. As the title implies, these pieces are based on the sounds of nature, electro acoustically processed, amplified and reconfigured. A few of the tracks like Hatohan’s “Quake” (wrong – ed.) contain interesting textures, but overall these compositions severly lack depth and development, indicating limited ability and vision.”

The Sound Projector(UK):
“Investigate this Trilogy or Triptych of compilations as soon as possible. A tripartite electronic and field recording international survey, mostly new artists from (respectively) Japan, America and Europe…all extremely strange and worrying sounds, and even if you like droning Ambient noise you may find some of it a bit too far-out for your tastes. As a listener, you’ve got to do some of the work yourself. Little of it is actually ‘musical’ at all, deriving from other sound sources. The project almost comes across like an antidote to music.

Chiky(u)u is a series of environmental recordings with a twist…’all material used in the sound pieces is gathered from the earth (stones/water etc.) or activity resulting from movement in the earth (earthquakes etc.).’ Starting off on this rather traditional Japanese premise – respect for the mother planet, landscape art like Hiroshige woodblock prints in sound – the technology whisks us into the twntieth century with tape treatments, layers of overdubbing, extreme volumes and stereo panning effects that even the most stoned out psychedelic record wouldn’t dare experiment with. The listener becomes a worm in the ground, a spawning salmon leaping up a waterfall, a wood-boring beetle disturbed by a sudden earthquake. Ten new works by Japanese sound artists unknown in the UK, and one hidden track – includes ‘Water Margin’ by Tamaru, who attached electrodes to the banks of the river Arakawa; ‘Scenes 4’ which is a field recording from a National Park in Osaka; and Akira Yamamicki’s Topography l-V, described as ‘sand dust limestone cave dead in crystal frequency magnetic field’. Not a record to sit down and listen to, so much as an organic thing to live with: plant it in the CD player and watch it grow over a long period.”

i/e (USA):
“Following Ash International’s trilogy of double CD compilations comes a trilogy of single CD anthologies focusing on three regions. Chiky(u)u, loosely translated as ‘mother earth’, is the Japanese installment. Many of the names here will be familiar: Aube, MSBR, Utah Kawasaki, Akira Yamamichi, and Tamaru from the Soup-Disk and Zero Gravity labels, Koji Marutani from the Digital Narcis label, and Toru Yamanaka of Dumb Type; Hatohan and TAK++ are two new lights on the horizon. This is no mere sampler but an elementally unifies series of subterranean sound experiments. The album as a whole, complete with an earthquake at track “-l” (played only by backtracking at the start of the CD) and nearly one hundred little tracks of silence toward the end, is a progression of ghostly rumblings and dark ambience paying trobute to the unpredictable sphere on which we live. As a glimpse into the margins of Japanese electronics, this collection, along with Soup-Disks Silverworld and Dorobo’s 02-Sine, is essential listening.” [Joshua Maremont]