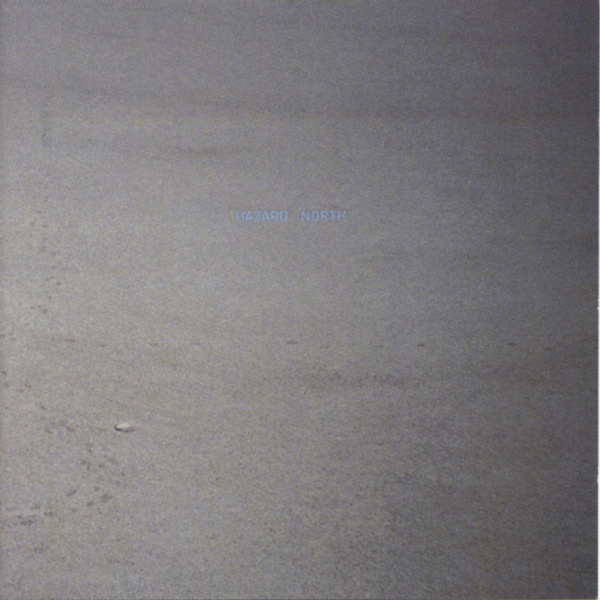 The first album by Benny Nilsen for Ash International. Benny founded Hazard in 1996 after a couple of years in several local ear-peaking guitar bands. Has since then been taking more and more interest in extreme weather conditions and its effect on humans – field recordings and the perception of time and space as experienced with sound.

Dead Ash still are still busy catching up with themselves releasing back-catalogue numbers – how many more have they got I wonder? This latest by ex-Morthond-er Benny Nilsen is a stark, chilly release destined to freeze the pants offa ya. Mr. Nilsen was born in Sweden, so presumably is himself no stranger to the kind of spaces that can be heard on this disc. Indeed, some of the soundtracks occur more as spaces than as any form of music – wide, empty horizons unroll in front of us. The snow seems to suck in all sound; occasional gusts of wind flirt with the pristine surface creating crystal flurries, which hover for a moment like uncertain gossamer slowly sliding off skin. An unzipped Bic doesn’t light – fire is unwelcome here, and even breath falls like a curtain of fine icicles. The distant line between snow and sky is so sharp it cuts your eyes and lingers too long as a retinal memory. This is cold made audible. [MP]

Hazard is the relatively recent incarnation for Sweden’s Benny Nilsen, who at the tender age of 16 put the Cold Meat Industry label on the map with his excellent Lustmord-style This Crying Age CD, released under the name Morthond. That classic from 1991 took industrial-ambience to a new level of suspenseful atmosphere, as a clock sound ticked as if towards the doomsday scenario of five minutes to midnight. Later, the young Benny was seduced by the sound of Ministry, taking Morthond/Morthound into an overpopulated industrial-rock area. Now with Hazard he is back to the profound ambient overpopulated North deepens his exploration into dark ambience, creating an equation between Europe’s polluted grey wintry textures and the first world’s technological automata that drone on as nature rests. Hazard adds a new narrative arrangement to the sounds of Thomas Koner, as tracks like “Absence Of Presence” and “Wound/Impact” feature cascades of metallic waves behind idling motor oscillations and cutting foreground scrapes, for an overall effect of one of the Hafler Trio’s pseudo documentaries.

Benny Jonas Nilsen founded Hazard in 1996 and is now apparently an ‘active recording workaholic’. Judging by his discography, this is true enough; no prolonged Elastica-style hibernations for this Swedish muso – he’s crammed loads into the last 3 years.
And this is the most recent effort. Available to buy now, ‘North’ finds him in filmic mood – lots of bizarre noises and tension-filled tones fill this eerie soundtrack-esque album.
It’s pretty chilled out stuff. Opener ‘Wire Netting’ takes a while to get going as does ‘Tangled Mess’. ‘Grey Speed sounds uncannily like a robot and ends as quickly as it somewhat confusingly began. ‘Absence or Presence’ and ‘The Vibrating Room’ have the beginnings of a tune and are – yes- atmospheric but very technical – a description which fits most of this album.

If you like your tunes with belting verses followed up neatly by and swiftly by a catchy chorus, this is probably best avoided. Experimental, Hazard is an interesting enough musical endeavour but probably not the sort of thing you’ll be frantically playing for weeks. [Jill Theobald]

Second album of Hazard aka B.J. Nilsen who’s better known as mastermind of Morthond/Morthound. With Hazard, the artist goes further than with Morthond. The music is more extreme, but only concentrated on a composition with less sounds (sic). This is the right sound to accompany a dark movie or documentary. The front-page illustrates a winter landscape full of snow and that must have been probably (sic) inspired the composer. I easily imagine these dark and cold winter days in the icy north which on the long run lead you into a state of loneliness and depression. That’s exactly the feeling I get when I’m listening to ‘North’ and from this point of view, it’s a well done production which will only please to (sic) a few number of people!

Cover art like an ECM LP shot by a Seasonally Affected depressive; titles like an e-mail conversation between a Derrida nut (“Absence Or Presence”) and a Virilio boffin (all the rest). A deftly unheimlich meditation on (cut off, snowed in) Place: long drone pieces flecked and striated with spoor,, track, glare and trill. Too many studio boffins make muzik which invites us to think it was made under mental siege conditions; Hazard’s BJ Nilsen seems like maybe he knows whereof he spars. The sound of a stealth bomber thinking to itself: I’m getting too old for this shit, and heading for the far places to shiver and rust. [Ian Penman]

A decent bit of Ambient environment-influenced electronic droning from Benny Jonas Nilsen, a young Swedish musician. The guy comes from a background of collecting field recordings, following developments in the international industrial scene, and making videos; he has made several prior releases as Morthond/Morthound and one other CD as Hazard. A true nature lover, one assumes – these tracks paint evocative pictures of very bleak, cold landscapes, indiscernible foggy horizons, and always somehow manage to suggest the presence of water not far away. A boat pulling up on the beach, fishermen cursing the emptiness of their lives, doomed lovers about to commit themselves to a suicide pact by leaping into the maelstrom….very wholesome. [Ed Pinsent]

:gloomy atmospheres with quirky foundations: North opens with a sound akin to a humming generator, gray sound, overcast ambience, low to the ground residual electricity, the unheard (or at least unnoticed) sounds that filter through everything around us, invisible, like dust in sunlight…it is the blueprint for the whole disc, rising from the transparent sounds, obtuse fluttering metallic origami, nervous wings in hummingbird blur. Benny Nilsen (formerly of Morthond/Morthound) follows up his first Hazard release, Lech, with a positively subtle collection of minimal gray landscapes in which sounds, like the circular unscrewing of an ice-covering manhole (“Grey Speed”), radiation pulsing out of the walls, Geiger counter needle sporadically twitching (“The Vibrating Room”), and the smack and crunch splintering of bones (sic) (“Wound/Impact”), are the norm. Light musical elements arise, but it’s the looped,dusky ambience that dominates…desolation amidst the gray flow. Further indication that Benny’s musical vision is limitless. [JC Smith]

Swedish twenty-four year-old recording artist Benny Jonas Nilsen, aka Morthond/Morthound, released one tape and three CD’s on Cold Meat Industry between 1991 and 1995, and subsequently changed his pseudonym to Hazard and released a CD on Malignant Records in 1997. Now we have NORTH, out on Ash Int’l records. His early old-school industrial influences brought him to current murky and noisy dark-ambient soundscapes, which still have a kind of northern, somewhat Scandinavian, vaguely Cold Meat sound and coldness yet closely approaching the matrix of noise…

Two recurrent themes with the Touch/ASH unit resurface here, both stamping their authority on what is essentially a purely scientific documentative process, echoed globally with the likes of Staalplaat etc. Hazard’s ‘North’ is a continuation on the forces at work within the symbiotic relationship between extreme environmental phenomena and extreme noise. Whereas Touch operatives like Chris Watson tap the directional vector from pure environmental source to tonal representation, Hazard works the reverse direction and uses treated sounds, tones and samples to evoke visions of his cold, barren and unforgiving Swedish landscape. A couple of tracks manage to match the sonic achievements of Ikeda’s and Vainio’s solo works providing sweeping electronic blankets and beat-less slabs of noise (especially the opening and closing pieces). There’s a twisted sense of complacency in the tracks such that they are almost guaranteed to find favour anyone who has followed the industrial scene from its early days (Hazard’s Benny Nilson draws on influence’s from ‘old school industrial’), but the challenge still remains for an effective fusion of ‘new school industrial’ with techno. Certainly Pan(a)sonic occupy this territory, and further openings have been forced by the few willing to push the electro envelope,… however you can’t help feeling that if this release outstripped its inevitability of picking up the heavy tag of ‘experimental / art gallery music’ then the year 2000 would provide something more exciting than the millennium bug.

Benny Nilsen’s bleakly beautiful Morthound albums helped to define the post-industrial palette of Sweden’s Cold Meat Industry label. Nilsen’s more experimental Hazard recordings expand upon the stark synth atmospheres of Morthound with field recordings and noisier, overtly electronic elements. WOOD, the CD component of a limited release that also includes the BRIDGE/FIELD LP, incorporates sounds culled from cellulose and woodland field recordings into layers of sculpted electronic drone. Throughout the arresting and accomplished WOOD, Nilsen artfully imposes incident upon environmental ambience. Processed samples infuse the wintry, nearly subliminal melodies of “Cut Out/Replay” with naturalistic texture and grain. The opposite is true of “Location South” and “Cords and Branches,” where the stilled soundscape of a deep-forest marsh is rendered surreal by the addition of metallic rustlings and scrapes and ominous, distant-thunder electronics. “Fibre Test” and “The Logfire” offset the quiescent, Terry Riley-like mantric minimalism of “Pylons” with Hazard-ous sonic suggestions of conflagration and calamity.