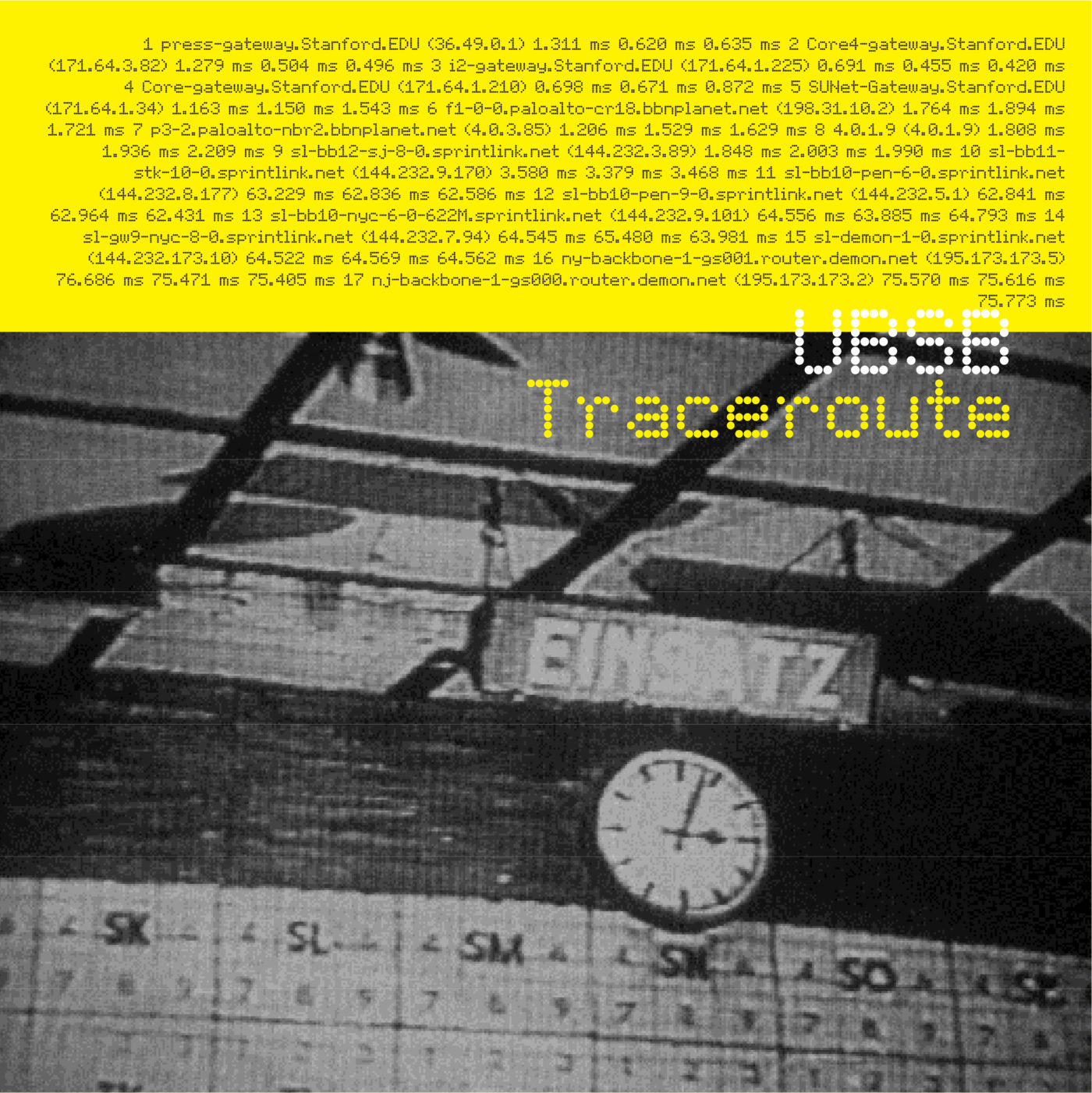 Data harvested from the internet in early 1999, from a research center in northern Europe. This data is rendered to analog to protect the original data from being reverse engineered or reconstructed. We created a Unix software agent that sat along a high bandwidth backbone pipe, essentially eavesdropping, gathering data, writing out a soundfile of everything it saw. Ethernet datapackets were consecutively written out to a file with no timestamp. Later the file header was hacked to open it in an audio editor. The different tracks represent different states of the network at different times, and different kinds of data passing by.

VITAL (Netherlands):
UBSB are Ulf Bilting, Edwin van der Heide, Zbigniew Karkowski and Atau Tanaka (or Sensorband featuring Ulf Bilting?). The Sensorband people, and more special Zbigniew and Edwin, are conceptualists: they think of a way to generate sound, perform it and then the release is ready. Onwards to the next one. “You open a computer, connect the wires to a mixing boards and then you mix it” is one of them. Here they get data from the internet and translate it with audio software into music. No wonder this ends up on AshRip, who brought us more obscure aswell as challenging audio information. How does the internet sound when translated in audio software? Harsh noise and I am not surprised, because most of the concepts performed by Zbigniew and Edwin end in a noise orgy. Side A spins at 45 rpm (although 33 is nice too) and is rhythmical (it could go well with the GJ Prins
record mentioned elsewhere), but at full volume. Side B is at 33 rpm (although 45 is nice too) and is more a continous noise affair. Not a bad record at all, but I wonder why such different concepts as ‘Voltage’ (the previous release by Zbigniew and Edwin) and ‘Traceroute’ end up sounding so similar? However with such great stories they are allowed to present theirthing over and over again.

The only thing I haven’t figured out, but hey I am an internet nerd so pardon me, is what UBSB means…?

Zbigniew Karkowski takes the opposite approach, burning his mix down to a series of solitary crackles. Karkowski is one-fourth of UBSB, who wins this week’s ‘ingenius or insane conception?’ award. Together with Ulf Bilting, Atau Tanaka, and Edwin van der Heide, Karkowski created a Unix software program that can eavesdrop on Internet communication streams and convert them to soundfiles. The vinyl-only Traceroute is far too noisy to really get at the aural nuances that mark the different streams of data passing through the network. But as an example of hardcore digital music it stands up well enough on its own.

Now things are getting grim. One listen to this extremely strange mini-LP and you’ll think twice before you sign up for Internet access, believe me. In fact, so horrified will you be that you’ll probably launch a solo campaign for the complete abolition of the World Wide Web. This record, realised from a ‘research centre’ in Scandinavia by four European artists, comprises a solid wall of utterly alien noises, derived from (we are informed) ‘data harvested from the Internet’. Anxious to probe further into the secrets of the web’s darkest corners, these science-guys wrote a special sort of ‘bug’ programme that could convert all the data it encountered into soundfiles. They launched their ‘bug’ into the Internet ether in a clandestine way, letting it gather whatever traffic it could. Now we really were getting near the ‘traffic cops’ I was describing earlier; this ‘bug’ outwitted them all, laughing ‘eat my dust, coppers!’ as it sped past at 150 mph.

When the UBSB boys retrieved their mighty micro-midget and hacked it open, this is what they found. Now, you could easily play this record and mistake it for some 30 minutes of white-noise aural garbage. And in a sense, digital garbage is what’s out there anyway. But that is not the point of this investigation. Instead, your brain feels like it’s been instantly stuffed with information, as though you’ve been able to plug the cortex of your brain directly into a gushing bitstream. Of course, it’s all pure fantasy – the sort of fantasy that our forefathers may have had when the radio was first invented. They probably looked up at the night sky and imagined they saw the ghosts of swing bands, announcers with plummy home counties accents, and corny soap opera actors all speaking at once, in a cosmic dance with the constellations. In the same way, we think we’re so modern as we turn on our 52K Modems and start sweeping the world for useful fragments of knowledge. And what we find out there is an incoherent Tower of Babel, constructed out of Gigabytes, by narrow-minded nerds and faceless corporations in equal quantity.

More than any record so far in the list, this Traceroute record gets closest to the reality of the computer’s sheer inanity. The only difference is that this record is barely recognisable as ‘music’, not even as a species of spaced-out, whacked-out Techno created by Zombie DJs from a chill-out room on Planet Pluto. Perhaps, in line with many of the Ash International releases, it’s more of a documentary recording. In which case it’s an extremely bleak vision of the future. Essential therefore.

This thundering, impossible set of beats was made by trapping datastreams at a Scandinavian high-bandwidth internet hub and converting the flood of raw data into an analog sound form. You couldn’t create these beats any other way, whether you rode an 18-wheeled mountain bike over an amplified, spiked rubber floor, equipped 500 mice with tap shoes, or suspended yourself in a room lined with dot-matrix printers. A fierce, fantastic musical moire that is not only transporting to listen to, it would be so much fun to DJ with. [RE]

UBSB’s Traceroute is not so much a musical work as an auditory document – if the liner notes are to be believed, a snapshot of data patterns over the internet. The conceit, with its overtones of surveillance (this data-monitoring agent was apparently “essentially eavesdropping, gathering data, writing out a soundfile of everything we saw”) seems a little forced but it results in at least mildly intriguing (if incredibly abrasive) sonic output, where a Merzbow-like snippet loop accelerates into a pummelling static assault. One for the noiseniks. [Philip Sherburne]

UBSB is really Sensorband – that globe-spanning trio of Atau Tanaka, Zbigniew Karkowski (ex-Hafler Trio), and Edwin van de Heide who generate immense noise washes using high tech equipment such as muscle sensors and infrared light cages – with the addition of Karkowski’s old Swedish comrade in sound, Ulf Bilting. While not as dramatically artistic as Sensorband, the concept of UBSB still dwells on the high-tec. The boys built software that eavesdrops on the internet, randomly snatching data from the Web that was then opened as a sound file, creating dense, unrelenting sheets of noise. On this analogue LP format, you couldn’t tell that these three tracks of semi brutal harshness, evolving very slowly through the course of many minutes, weren’t made by Japanese noise box twiddlers or German power-noise auteurs, which I suppose is the point – the concept outweighs the actual impact of the execution. The detritus of cyberspace is an anonymous noise. [Manny Theiner]