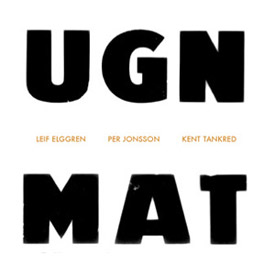 To celebrate the Swedish artist and composer Leif Elggren and his forthcoming retrospective exhibition at Färgfabriken, Stockholm, “Flown Over by an Old King”, Ash International R.I.P. has released a compact Disc

The intensity of the recording reflects that of the activity on stage. It also is a metaphor for the integrity with which Leif has pursued his career without damage to his originality, spirit and sense of humour – dark and offbeat, but never losing sight of the fun. His other releases, usually as part of the Firework stable, include the book Experiments with Dreams[every toilet should have one so you can laugh and crap at the same time] and one of the finest CDs ever recorded, Talking to a Dead Queen [1996]. For Ash he contributed to Antitrade [1999], and co-authored The National Anthem of Elgaland-Vargaland [Ash 3.3, 1996] with CM von Hausswolff.

Your Flesh (USA):
Ugn Mat is a remarkable document of two live performances from 1985 and 1989 and includes some pretty cool electronics, power drone, and textural tomfoolery that arc across a listening space in what seems to be less time than what the CD read-out would indicate. Elggren, Jonsson, and Tankred have layering down to a science, adding and subtracting curtains and swaths of noise, and placing little bits of sound perfectly. Maybe an opera singer pops up, maybe strings seem stretched across pipes, and maybe electronic locusts seem to chirp just over the horizon. [Bruce Adams]

The Sound Projector (UK):
Here’s another ‘mind-baffler’ special which i take as a healthy indicator that the Ash International projector remains firmly on target with its agenda to provide the world with more than its fair share of intensive art recordings. Not that this is some incomprehensible ‘concept’ piece; trust your ears, not your brain, because after one listen you will be hooked into the flow. The rec comprises two longish suites, both of which are made of unrecognisable low roaring and droning sounds, intercut with distorted old records struggling to make it passed the flow of dense gaseous forms. There’s old opera records in the first batch, and whispering voices in the second which might be Gregorian chant or simply a bunch of secretive monks. You bet your life it ain’t the Holy writ they’re discussing, brothers. Using old records to add that haunted feeling to your work is always a good move (ask Philip Jeck) and , and it works superbly here. As it turns out, what we’re hearing is the documentary recording of two utterly absurdist and bizarre performance actions by that well-known swedish loon, Leif Elggren – along with the help of his mateys Per Jonsson and Kent Tankred, the latter of which joined Leif with that infamous ship-hammering project. (see The Object, reviewed in issue 7). Besides being silly, the actions involved here are also pretty funny. For ‘Ugn’, which simply means ‘Oven’, the Swedes piled a load of porridge into orange-painted ovenware, and bunged the whole shebang into some ancestral oven, letting it cook away while they smashed things up on stage with sledgehammers. Some of this violence, including the breaking of glass, is audible in the finished product – which at times seems to locate the listener right inside those fucking ovens, watching with dismay as bubbling porridge pots explode everywhere. As an added treat, the CD itself is painted orange, perhaps to suggest that it too is implicated in the action, and it should explode in a hideous mess as it ‘cooks’ itself inside the ‘oven’ of your CD. Play it loud enough and it just might do that. Won’t you look a sight when you open the door to your friends, with hot porridge dripping all over you! Very coincidentally, the ‘Mat’ suite is also something to do with food – guys in false beards, strapped to beds on stage and kept awake while they’re fed potatoes and whisky. Which places it somewhere midway between a Beckett drama, and a typical day at the Glastonbury rock festival. Both of these ‘actions’ speak of delirious absurdity to the listener, thus lifting my weary spirits – and the very thought of them happening at all (let alone yielding such powerful music) is enough to induce fits of sweating. ‘Ugn’ happened in 1984, the other in 1989; this release coincides with an exhibition of Leif Elggren’s work, and the release date is significant in the alternative ‘calendar’ that holds sway in the imaginary kingdom – Elgaland-Vargaland – over which the major loon presides. In short this is an absolute corker of a disc. Keep it alongside the Ocsid Opening sweep record and play them whenever you need a good dose of awe-inspiring fear and humour in equal measures. [Ed Pinsent]

ggg (net):
Leif Elggren / Per Jonsson / Kent Tankred – UGN/MAT The activities of Sweden s Leif Elggren and his friends, generously documented by Ash International and Elggren s own Firework Editions, blur the lines between sound art, composition, and performance art. Among their exploits are recordings of laughter, snoring, vehicles, and unexplained voices; experiments with dreams, beds, corpses, and politics; books of random names and obnoxious letters written to celebrities; and the administration of the imaginary Kingdom of Elgaland-Vargaland. UGN/MAT documents two separate performances. A description of the disc s contents provokes the question “why?” Then again, art neither requires nor allows for easy answers. The staged presentation of UGN (“Oven,” 1984) involves a pot of porridge, 27 girls dressed in white, tools, actors, and smashed porcelain. Take away the spectacle, and you re left with 25 minutes of low-definition rumble highlighted by windy noises, sporadic clamor, and a climax that sounds like a recording of an airport runway. MAT (“Food,” 1989) begins after a minute of silence. Again, the stage elements a dog in sheep costume, 10 actors with false beards eating potatoes and pills are incidental, bearing little relation to the disc s 35 minutes of stilled drone. No doubt it all means something, especially when played loud, but its still very odd.

The Wire (UK):
Released to celebrate Swedish artist/composer Leif Elggren’s 50th year and accompanying exhibition, this double dose of performance art soundtrack stuff continues the ash International (RIP) tradition of recording strange noises that strain the listener’s imagination (and endurance) to the max. Here we are presumably supposed to be listening to vats of porridge spitting inside orange coloured ovens, sledgehammer symphonies and the crash of porcelain, as Leif and chums let rip in the Eraserhead soundscape they have immersed themselves in onstage Atmospheric, brooding and, at times, quite brilliant, but what the hell is really going down here only Elggren and Ash International (RIP) can know. [Edwin Pouncey]

Tandem News (Canada):
From the strange world of performance art comes this noise work from the 1980s that has been reissued to coincide with the Leif Elggren retrospective at the Fargfabriken gallery in Sweden (www.fargfabriken.se). The Swedish artist/composers Elggren and Tankred have collaborated often, performing in art and music spaces all over Europe. UGN (Oven) was recorded in the artist-run Electroacoustic Music Studio in Stockholm for a performance in 1985, and originally released on vinyl the next year by the music and text publisher Radium. The piece brought the intense sound and violent actions of factories to contemplative art spaces as the two performers made porridge in industrial ovens. Rumbling bass frequencies simulated the roar of blast furnaces as sledge hammers were used to smash porcelain. Maybe if they danced around while they swept up the Swedes could have played Broadway with Stomp.

Francois Couture (AMG):
UGN/MAT was released in conjunction with a retrospective exhibition of Swedish conceptual artist Leif Elggren’s work presented in Fall 2000 at FŠrgfabriken (Stockholm, Sweden). The CD contains two pieces recorded in the 1980s for use in stage performances (the middle track “60 Seconds of Silence for Per Jonsson” is actually just that). “UGN” (“Oven,” 25 minutes), recorded in December 1984, was first released in 1986 as a 12″ by Radium. The piece opens on very low bubbling noise, breaking free only three and a half minutes later. A shroud of low-frequency noise is punctuated by what sounds like a carpenter working (hammering nails in wood, particularly), with occasional electronic sounds cutting through. An opera excerpt intrudes for a brief moment ten minutes before the end and the shroud is replaced by dense and busy noise at minus six minutes that will slowly fade out, leaving the aforementioned opera faintly heard in the distance. “MAT” (“Food,” 35 minutes) is closer to the dynamics of electroacoustic works, although it unfolds very slowly. Both pieces have complex trance-inducing walls of sound, but require time and openness to be appreciated.

Boomkat (UK):
Originally released on Ash International back in 2000, the two lengthy pieces making up this disc are actually rather older than that: ‘UGN’ was recorded in December 1984 at EMS in Stockholm, and was first released as a 12″ by Radium 226.5 in 1986. ‘MAT’ came a little later, also recorded at EMS, but in May 1989. Led by Elgaland-Vargaland founder Elggren, these two documents still have the ability to confound, yet both retain an enormous sense of power. From ‘UGN’ you can expect a bizarre array of electroacoustics that converge on a kind of noise-based performance art, shifting through dark rumbles, mangled operatic vocals,strange percussive gestures from within the room and distant string dissonance. It’s hard to work out quite what’s going on, but the wonderfully absurdist feel to it all is amped up considerably by the accompanying text’s reference cues: “In the oven the porridge cooking” and “27 girls dressed in white”. At thirty-five minutes, ‘MAT’ is ten minutes longer than its counterpart, and spends much of its duration stirring up a more subtle, drone-based soundscape. Not without a tendency to erupt into spillages of manic noise and industrial abrasion, this is the kind of musical rabbit-hole Nurse With Wound and The Hafler Trio like to lead you down – challenging, sonically unfathomable and lined with a peculiar sense of humour, UGN MAT comes highly recommended.