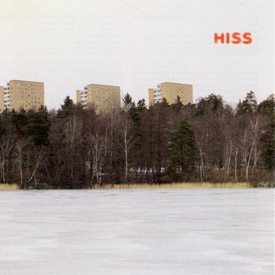 An Ash International sampler released to coincide with the HISS installaton in the elevator in the Lydmar Hotel, Stockholm, Sweden.

Your Flesh (USA):
This is exactly what a compilation ought to be. Right from the start with a Disinformation, Evan Parker collaboration Touch seems to notify the listener that Hiss is all about juxtaposition and the potential for synthesis in a collection of tracks. The tracks here range from spoken word to field recordings to power drone to the lacelike constructions of electronics by Darren Seymour and Mark Van Hoen. The compilation covers a range you could simplistically describe as post-industrial, the liner notes refer to an elevator rigged to make sounds with every button pushed, or even better, “a little piece of tranquility, noises, sounds, and compositions.” For the listener, especially one fatigued by a parade of compilations over the last few years, Hiss makes itself welcome as all the various pieces fir into a coherent whole. [Bruce Adams]

Grooves (USA):
Hiss is Ash International’s second sampler featuring artists on their roster, the first being Record in 1995. Hiss was curated by MSCHarding as an installation for the hotel lift in the Lydmar Hotel in Stockholm, Sweden. As is expected of Ash International RIP, the music found on this sampler is a combination of field recordings and intense tonal listening music, some of which are extracts of much longer pieces. “London Overflow” by Evan Parker vs Disinformation is the combination of a throbbing sound installation entitled “National Grid”, the rattle of LORAN-C radio navigation pulses and sax talents of Evan Parker. Hazard’s “Pylons” was recorded in a forest in Sweden and features electronic tones, minimal rumbles and buzzes. “LM” by Seti consists of layered electronic fuzz and fizz. Daren Seymour (Scala) and Mark Van Hoen’s (Locust) “Supermind’s Light Becomes Part of the Earth” is more musical in structure, consisting of crackle and hiss overlaid with sci-fi electronics. “Leisure Zones” by Bernd Friedmann comes with specific listening instructions and is based around a low traffic noise rumble with the occasional interruption from an electronic blip, clang or water trickle. The sampler closes with an extract from MSCHarding and Jeff Sedgley’s 6-hour beach recording and is based around a heart monitor and breathing apparatus recording. Each of these musical pieces is interspersed with field recordings ranging from the sound of a projector to an airline pilot’s announcement to his passengers to a drag car racing meet (amongst others). Another interesting, artistic and intense work from Ash International RIP, whose output is consistently intriguing and thought provoking. Serious listening music to inspire, contemplate and consider. Great stuff. [Paul Lloyd]

All-Music Guide (USA)
Although most of the fourteen tracks on Hiss are taken from previous Ash International releases, one could hardly consider this CD to be a label sampler. Thomas Nordanstad had organized in September 2000 a music installation at the Lydmar Hotel in Stockholm, using selected music from Ash International played in the hotel’s elevator (one track for each floor). Hiss serves as the soundtrack for this installation. The theme of the project is hiss, surrounding noise, from amplified deep space radiations to tape noise to elevator noise. Eleven of these fourteen tracks were previously released and are presented here in most cases as excerpts. Three short unreleased tracks serve as incidental music, helping to glue the project together. This album should really be listened to as a whole, it stands on its own. Of course, there are highlights, like the Disinformation and Evan Parker duet, Leif Elggren’s “Mother!!?” and MSC Harding and Jeff Sedgley’s “I Saw It All Happen from Beginning to End and I Still Can’t Believe What I Saw”, built with the sounds of an hospital room. But what surprises the most is how it all fits together. The secret is in the fact that each of these pieces is an attempt at letting the listener hear the voices from within or from outside/beyond. These noises and the sound art and electronic music that accompany them sound both familiar and alien. That’s the beauty of it all. [François Couture]

Outburn (USA):
Opening with the solitary sound of a film projector, Ash International’s Hiss compilation has more to do with cinema and storytelling than it does with music in the traditional sense. The montage of processed site recordings and chance recorded conversations maintains a high level of quality throughout. Evan Parker’s saxophone solos over Disinformation’s chattering static upwellings has to be one of the most moving academic pieces I’ve ever heard. Other fantastic pieces include Hazard’s shimmering forest ambience inspired ‘Pylons’, and Leif Elggren’s heartbreaking, minimalist reflection upon his mother’s death. The charming bits of conversation interspersed between many of the ambient tracks covers everything from alien voices, to prison breakouts, to even drag-racing. If you enjoy a thoroughly intriguing blend of found dialogue and abstract atmospherics, then this would be an excellent compilation to pick up.

XLR8R (USA):
The aesthetic production of noise and experimental sound seems at time inevitably indebted to theoretical explanation. Sometimes the obvious isn’t as interesting (the sound of the hiss in this case) unless placed within some grand conceptual framework. Like the brilliant Ritornell label, however, listeners are fortunate that Ash International archives, highlighting a collaborative endeavour involving an elevator in Stockholm’s Lydmar Hotel. An excellent release featuring pioneers in the fields of sampling, noise and sound installation for those who want more than what they hear. [Kathleen Maloney]
re:mote induction (net):

Hiss is about an installation piece, a series of sound works used in an elevator in a Swedish hotel. A redefinition of “elevator music” to give it a more experimental feel, the result is a number of pieces that vary from sound works, spoken word piece and compositions. The nature of the release is that it is a documentation, so each piece is a recording of what each artist presented. With which some pieces are more interesting than others. For me the best pieces presented here are by Leif Elggren, SETI, and Bernd Friedmann. Elggren’s Mother!!? was recorded after the death of “one of his mothers” and is a sustained tone mixed with spoken dialogue, a female voice followed by little blips. While underwhelmed by the most recent SETI album, the selection from that L.M. featured here works in this context, fluctuating and stressed sounds layered together, creates something of a flurry of motion. Bernd Friedmann’s Leisure Zones is an extract of the whole piece. A piece starting with strikes and wet dripping clanks, backed by a rush of harsh air, this shifts and buzzes some, keeping up a movement of sounds. Other tracks which are interesting are AER’s Projector, a short motorised piece, sounding like the progress of a lawnmower past a fixed speaker. Then Hazard’s Pylons, a chromatic drone building with a lush warmth. A piece only listed as Airprox, which is a recording of in-flight announcement looped, acts as a pure source sound – accompanied by the quote “flying is the tobacco of the 21st century”.

The Locust/Scala collaboration of Darren Seymour & Mark Van Hoen offer Supermind’s Light Becomes Part Of The Earth, which builds up a melodic piece by combining brushing static washes with bobbing electronic sounds and a clear melodic structure – a light and attractive piece. The last piece is another with just a straight title – I Saw It All Happen From Beginning To End And I Still Can’t Believe What I Saw – a pulse and wheeze of medical equipment, electronic hum and compressive motions as recorded by MCS Harding (ASH) and Jeff Sedgley (Firework) and being an extract from a piece 6 hours long! Of the remaining pieces I find Lem Tuggle’s Breakout particularly tiresome. Being a recording of the man’s attempts to breakout from death row, as such it is a spoken piece, which for documentation purposes may have a momentary interest for some. But for repeat listens of the collection I find no lasting interest, though a lot of that is personal perception of the piece.