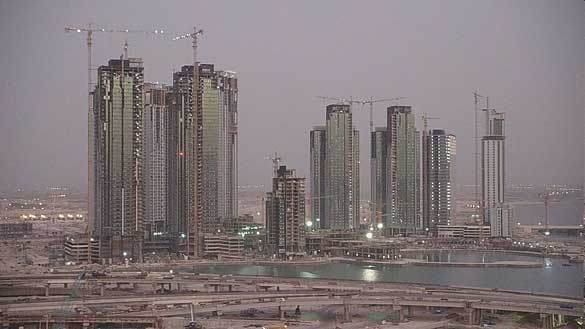 Filmed and edited by Paul Williams on location in Abu Dhabi.

Paul Williams writes: “Arriving in Abu Dhabi my initial reaction, standing on the balcony of my hotel room on the 20th floor, was disorientation and near-vertigo. Laid out before me was a building site on a scale I had never seen before; a small island was under construction.

This was “a room with a view” of a very different kind. Not some picturesque vista illustrating historical achievement but a vast, stark scene of becoming; a display of the knowledge, effort and will required to alter the landscape and create a new world. The skyscrapers I was watching turn from plans into reality suggested the phrase “Pillars of Wisdom”, adapted from the title of T.E. Lawrence’s account of his life in Arabia.

As the days went by the view became a site of contemplation. There was always something going on, some detail that warranted attention: the endless comings and goings of the work-crews, the slow gestures of the cranes, the shifting patterns of aircraft warning lights.
I wanted to capture something of what I was witnessing so, as you survey these monuments rising from the white sand, look closely and you will see tiny events occurring: the slow trajectory of a car’s headlights, the flare of a welder’s torch at night, even a bird flying across the face of the sun…

As I have come to know this landscape I am continually reminded that even though we live beneath the gaze of giants, made with our own minds and hands, it is our simple joys that continue to define us as human.”