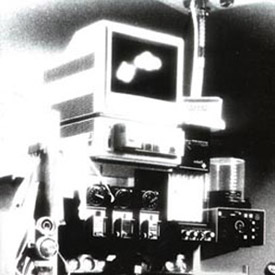 FER1020 – I Saw It All Happen From Beginning To End And I Still Can’t Believe What I Saw – Life Everlasting, Amen

Track Listing:
1. Intake/I Saw It All Happen from Beginning to End, and I Still Can’t Believe What I Saw
2. Unknown Entry Event/After Life
3. Outake

The piece is a comment on the state of the health of the world. We are sick and we know it, but are helpless to act, as technology removes our potency and undermines our responsibility and our ability to make critical judgements. The listener/viewer is presented with a recording of a life support machine and its relentless quest to keep the patient alive and in doing so becomes part of that patient, attached by tubes through which the fluids of life pass, pumped by a metal heart into one made of human tissue.

This symbiotic relationship is a metaphor for the relationship between ‘nature’ (or organic life) and ‘science’ (or inorganic). When is the patient of nature or of science? At what point are we becoming less than human and more a part of the machine?

The recording from which this CD is taken is over 6 hours long; it was mixed and mastered at Thor’s Place, Brighton, England on November 18th 1999. The original version was recorded in England and mixed in Stockholm in 1998 – with thanks to Andreas Karperyd. The full length version was played live on an octophonic audio system throughout the day as part of Sonic SeaAir in Brighton, May 1999.