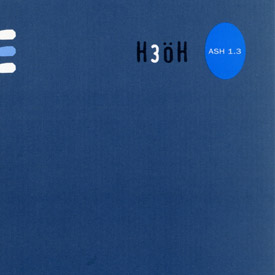 Released here in the United Kingdom as a dance 12″ (white label), this recording has appeared in numerous dance charts (Melody Maker, Mix Mag, Fat Cat…) and has become a club hit.

Unnamed stars contribute to this Hafler Trio mix, recorded in Reykjavik, Iceland. Side b contains a rare example of Andrew Mckenzie of The Hafler Trio (H3O) on vocals.

The CD was released in association with Soleilmoon Recordings (Ash 1.3CD)

Organ (UK):
“The marvellous M.N.O. Gol’fish must remain my aural companion. Stunning, mesmeric, brilliantly constructed trance this is perhaps the most unlikely record that The Hafler Trio could release. The A side has an almost epic quality, stretching, weaving and interlocking sounds, introducing completing unexpected elements (including the first coughing solo in the history of Techno) and gelling them together around a ridiculously catchy hookline. The flip side is another extended piece, a little less staccato, more flowing and equally alive with shifting unpredictable sounds and samples. Complex house for those with brains as well as ears.”

Sent to idm@techno.stanford.edu:
“Got a bit of a problem. I got hold of this record, possibly a promo, by a bunch called H3ÖH. It sounds something along the lines of tribal ambience, if its possible. There’s lots of flutey sounds, analogue bubbling, and low (african?) chanting, as well as the normal sort of ambient type samples and sounds. The thing is, who are they? There are two tracks on the 40-min long 12″, and I wouldn’t mind finding out the track names.

Some of the sounds are very Zoviet-France (Newcastle band affiliated with UK industrial scene, but not very industrial, more eastern sounding than western) and it makes me think its them under a different name. Who knows?

Any help would be appreciated: upcoming releases, label, names, anything.
Cheers. [darko]